In 1980 a small group of Bluebell Railway members paid a visit to Woodhams scrapyard in Barry, South Wales. Woodhams was one of the final resting places for the displaced steam engines of British Railways awaiting the breakers torch. 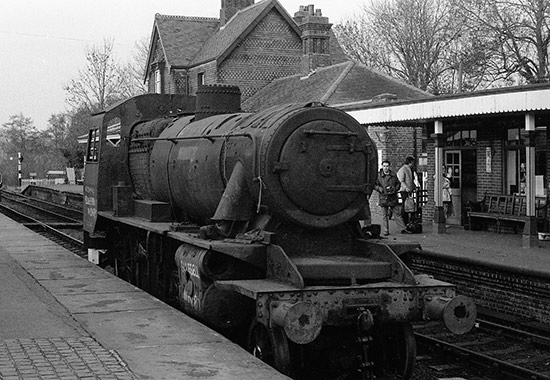 The lack of a tender and the fact that none of the 60 tender engines ran on Southern metals resulted in the decision being made to rebuild the engine as a tank engine. 30 engines were originally built with numbers 84020 to 84029 being allocated to the Southern Region based in the Eastern section for secondary duties mainly in Kent and East Sussex but none had survived into preservation. The decision to rebuild 78059 into a tank engine meant the next number in the series was taken out hence 84030 was born. 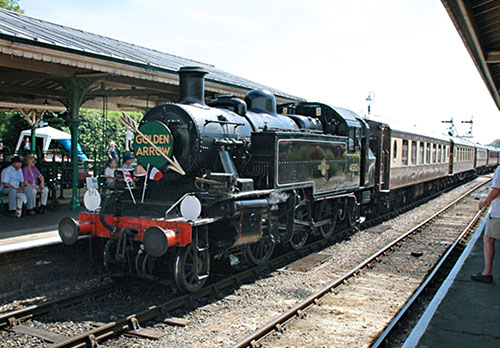 The Class 2s were the smallest locos of the BR standard group of engines consisting of 60 tender and 30 tank engines. Both classes were based on the LMS (London Midlland and Scotish Railway) Ivatt-designed locos, classified as 2MT (Class 2, Mixed Traffic) and destined to work on branch lines and secondary duties replacing a number of life expired engines.

Left: A taster of what’s to come, when Ivatt LMS 2MT Tank No. 41312 visited the Bluebell

The Ivatt-designed LMS Tanks had proven popular across Britain due to their wide route availability, ease of maintenance and efficient performance. The BR locos were a slightly heavier version of the Ivatts.

For interest 78059 was built at Darlington and released into traffic in September 1957 being allocated to Chester Northgate. After several moves it finished its working life at Crewe from where it was withdrawn in November 1966, a working life of just 9 years.

Thirty examples of the British Railways Standard Class 2MT 2-6-2 Tank locomotive were built; 84000-84019 at Crewe Works in 1953 and 84020-84029 at Darlington Works in 1957. They were all due to be built between 1952 and 1953 but the steel shortage in Britain’s post-war economy caused a cut-back in the locomotive building programme to be implemented early in 1952. This resulted in the first of the class being outshopped in August 1953, 12 months behind the original schedule, and the Darlington locomotives being deferred for several years. The first 20 were designed for use on the London Midland Region, whilst the 10 Darlington-built engines were delivered to the Southern Region.

Class: Standard Class 2 No. 84030 – as being rebuilt
Wheels: 2-6-2T
Class introduced: 1953
Designer: R.A. Riddles (but based closely on the LMS Ivatt design)
Purpose: Light Mixed Traffic on cross-country routes
Total number built: 30 (this will be the 31st)

John Griffiths’ photo (above) shows British Railways Standard class 2 No. 84013 just out of the paint shops at Crewe Works. He dates it as 1959, although the later BR crest, the presence of overhead wire warning flashes and records showing 84013’s visit to Crewe occurring during September/October 1960 make a date during October 1960 more likely. Photo © John Griffiths

After arrival at the Bluebell Railway some work was started on the loco but the main effort for a good length of time was to raise funds to repay the money loaned to the group to cover the cost of transport from Barry. Eventually the boiler was taken out and stored on a flat wagon and the frame was lifted from the wheel sets, these were cleaned and sent to Swindon for turning, returning to the Bluebell during March 1991.

A little while after the wheels were returned to the railway Colin Turner recruited Stan Ponting and John Jesson to work on the project and a small group was formed who met regularly on Thursdays. The next major step was to cut off the rear section of the frames and weld on the newly constructed rear frame extension, the engine finally becoming a tank engine, this work was completed by the workshop staff during 2011.

The next big stage was to construct a hard, covered and level standing area as the engine had been stored in a number of locations all being outdoors and open to the elements other than a short period in the running shed. This made working on the engine difficult and very much weather dependent plus a continuous battle to protect the engine from the British weather.

The problem was finally overcome when in 2018 hardstanding was created, with a poly-tunnel style building erected over it, alongside Atlantic House. The opportunity was taken to reunite the frames with its driving wheelsets when relocating the engine into its new dry home. 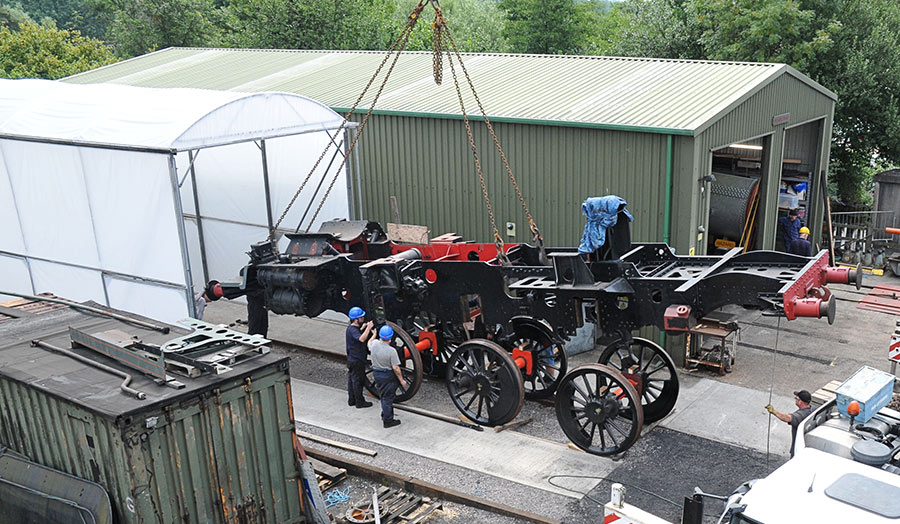 In between these major stages, work has continued on a large number of items such as front and rear pony trucks, horn guides, sanding valves, vacuum and steam pipework plus a large number of valves, springs, fittings etc. A lot of this work was recorded in John Jesson’s 25 newsletters published between Spring 2006 and Summer 2018 and in the regularly published Bluebell News magazine.

Since the untimely death of John, who with Stan Ponting led the team working on the project for over 12 years, a new team has been formed led by Chris Wren and Brian Turner. Tony Sullivan, who was in the party that visited Woodham’s scrap yard in Barry and was instrumental in securing the engine for the Bluebell, is still a keen member of the working group looking after all the funds and administration.

To keep the flow of information on the progress of the project to all of our loyal supporters and contributors to our funds this new project page has been set up and regular updates will be added as progress is made.

As of Spring/Summer 2020 the project has come to a halt due to the Coronavirus pandemic and the enforced shutdown of the railway. This has not meant that nothing is happening as Harry, an apprentice in the Loco Works, is preparing manufacturing drawings for the side tanks. This is proving to be a difficult exercise and very time consuming but hopefully Harry will have the drawings in a position that cost estimates can be obtained once we are all back at the Railway. In addition Vic Short, a volunteer in the Carriage and Wagon Department at Horsted Keynes, has been producing a number of CAD drawings, from information supplied by Brian Turner, suitable for laser or water jet profiling of components for the side tanks, sanding valves, hand brake and bunker.

If you would like to join the team why not join one of the Railway’s volunteer “Find out more” days (usually on the second Sunday of each month) or come along on Thursdays and ask for the Class 2 working group.

This is how 84030 will look when the rebuild is complete 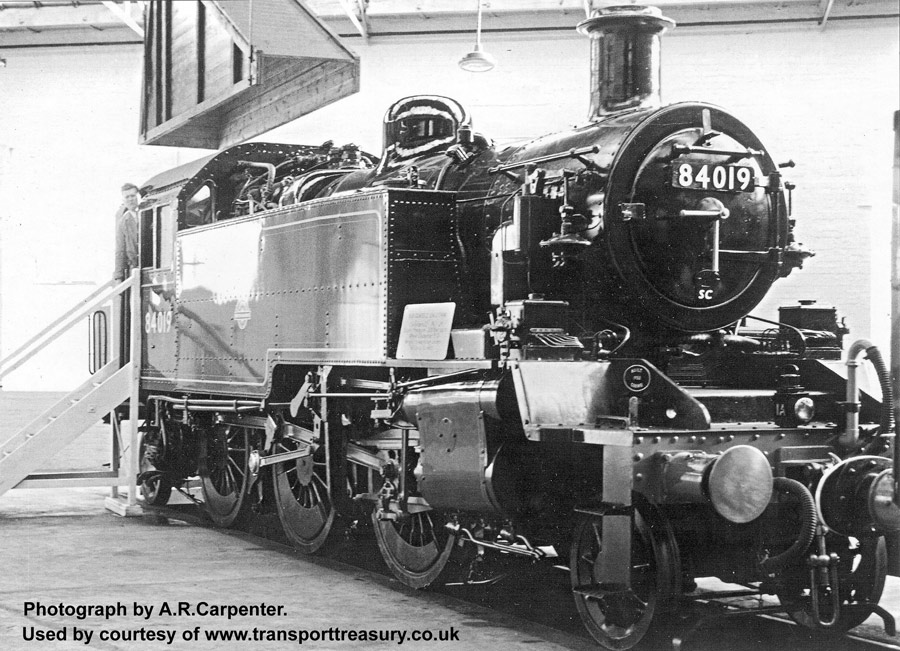