After 30 years in departmental service, this interesting survivor of the particularly narrow stock built specifically for operation on the Hastings line arrived at the Bluebell in 1992 to be dismantled for spares. However it was discovered that its body structure was remarkably sound, although some repairs to the bottom-side structural members would be required. A volunteer team decided to tackle its restoration. Many internal components were already to hand on the railway, and the underframe and bogies have been stripped and repainted, whilst the body was lifted from the underframe to enable the bottom-side repairs to be made. With structural woodwork repairs completed, and new steel sheeting fitted externally, work carries on with a very small team of volunteers towards the eventual return to traffic of this vehicle. In August 2019 the carriage entered the carriage works for a final sprint to completion.

Further details of the carriage and its history can be found on the web page for this carriage. 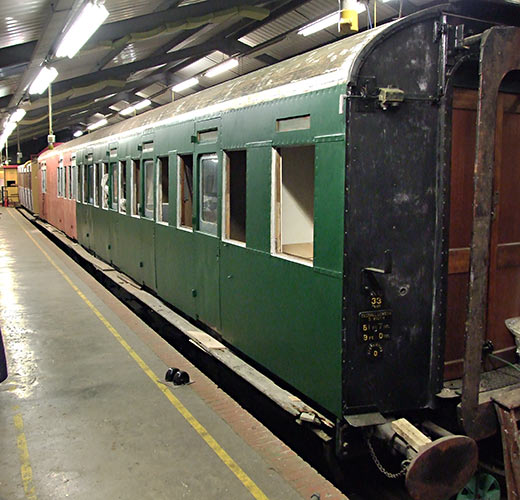 Richard Salmon’s photo shows pre-lockdown progress as on 18 March with the roof repairs completed, and painting into undercoat progressing. In addition to the edge boards, stainless steel screws have been used to ensure every other board on the roof is securely held in place, and considerable work undertaken on the toilet roof tank and its cover.

Flexible plywood has been purchased and painted up ready for fitting to the compartment ceilings. 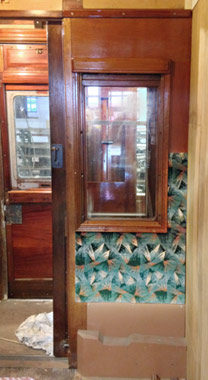 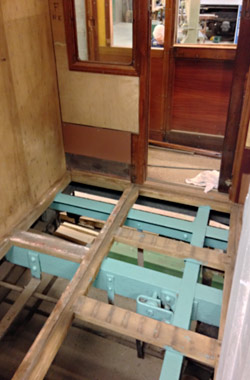 The first of the trimmed quarter-pads, in reproduced green SR jazz-pattern moquette, have been temporarily fitted. The plywood floors of all six compartments have been lifted and painted on their undersides; the second photo shows the exposed sections of the underframe, which had been cleaned and painted 20 years ago, have now been treated to some further coats of paint, to nip any corrosion in the bud. (Photos by Richard Salmon)

Alex Morley’s photos below show the refixing of the panelling on the east side, completed over the New Year, and the ends have also now been stripped for repainting. Also note the lowest roof board has been replaced. On the west side, the first green undercoat has been applied, and partly rubbed down. The lowest roof board has also been removed for replacement with a new curved and tongued/grooved board machined up in the workshop. 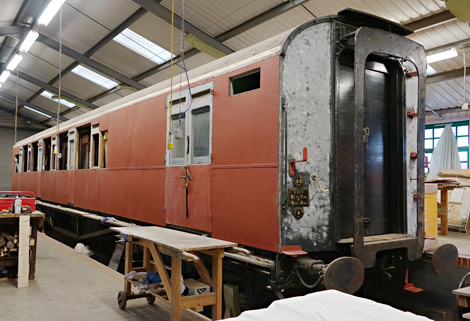 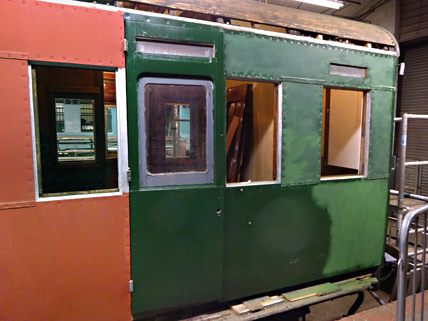 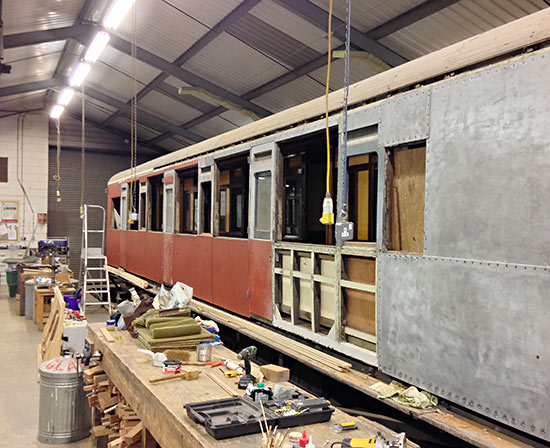 By 14 December work on the roof is progressing, with the first new board fitted, and continued progress on the panels. 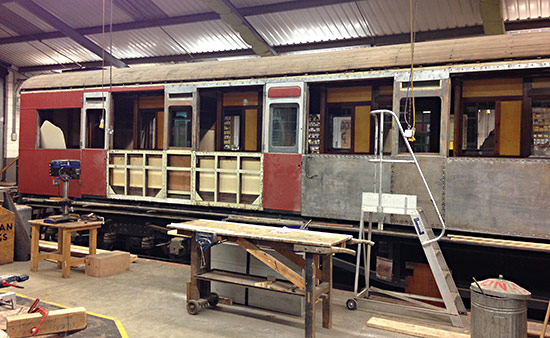 Progress on the east side, 16 November (Richard Salmon). The bottom roof board, which unlike the screws on the rest of the rood, was simply nailed to the cant-rail (the main structural timber along the top of the body) has been removed for replacement. Note that half of what appear to be doors are actually not. The window openings still have droplights sometimes leaving confused passengers searching the outside for a non-existent door handle.

By 6 October, as seen in the first photo below, the stripping, treating and priming was complete on the west (non-corridor) side and the second photo, taken on 26 October shows the start made on the east (corridor) side (both Richard Salmon). 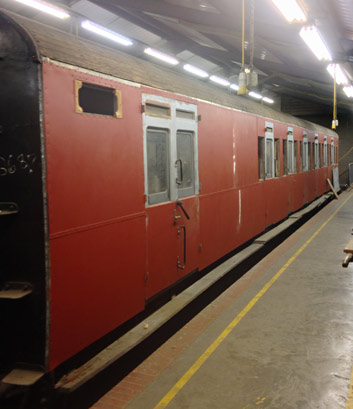 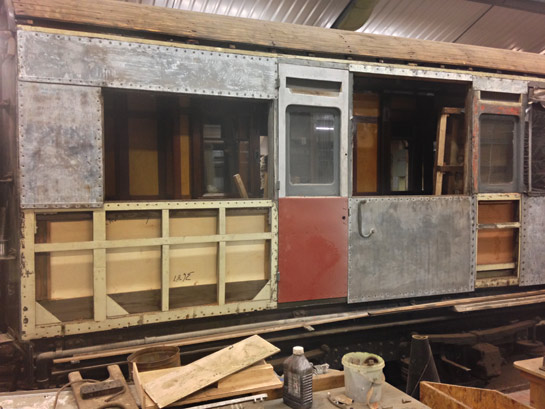 Alex Morley’s two photos from 9 October below provide further insights into the work on Maunsell Brake Third No. 3687, with the external toilet-light (window) frame sections cut to fit (the teak will be varnished rather than painted, as per the original livery). The timbers had been machined by Richard Salmon, and fitted by Tony Clements. The interior of the lavatory compartment (which was reconstructed by David Wigley) is being assembled by Ray Medhurst. 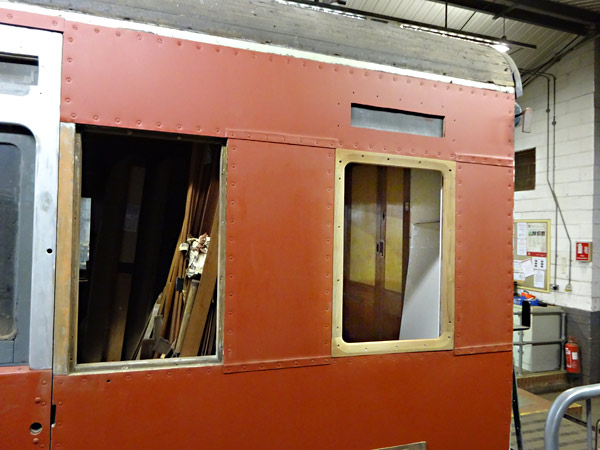 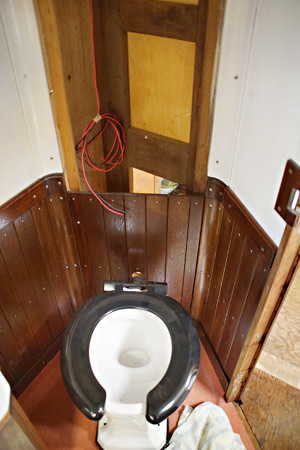 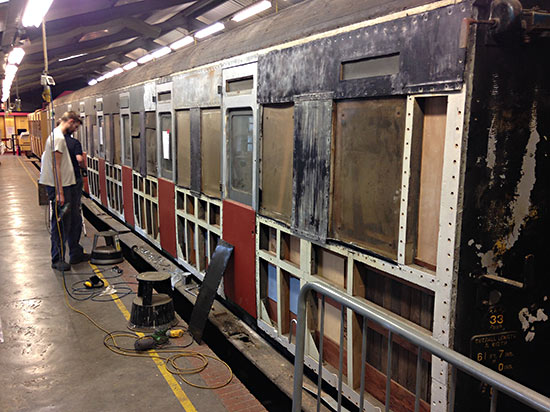 Following the completion of Bulleid Composite No. 5768 and some intermediate work on Bulleid Open No. 1482, there was finally a space in the main workshop for 3687 in August 2019. Over the previous couple of years David Wigley had removed each of the external doors in turn and stripped the steel panels to bare metal, because the primer used 20 years earlier was not going to provide a stable base for further painting.

David was now joined by a team of volunteers who had been working on the Bulleid Composite and the Camelot Society’s CCT, with the intention of rapidly completing the remaining work. The first task, as seen in Richard Salmon’s photo taken on 31 August, was the removal of the main lower body steel panels, made new a couple of decades earlier. Whilst the upper panels were stripped, treated and primed in situ, the lower panels were done off the vehicle, also giving access to the main structure to confirm the integrity of the timber, last exposed 20 years earlier. 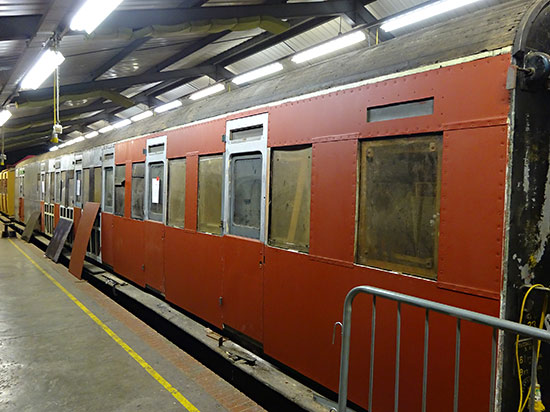 Illustrating that the plan was not to hang around, less than two weeks later Alex Morley’s photo shows the progress made in that time. 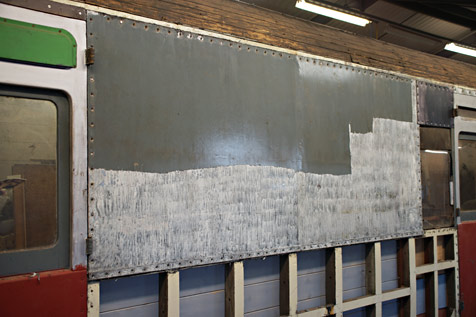 By 21 September the paint stripping had reached the large panel on the side of the brake van, as seen in another of Alex’s photos. 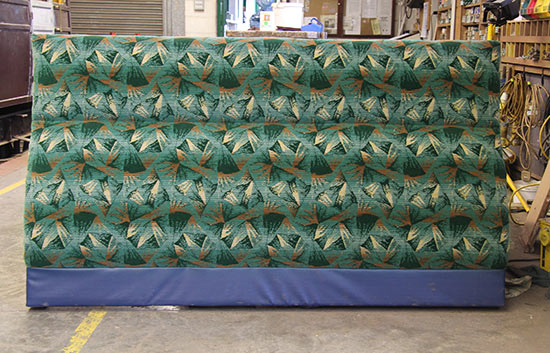 Moquette has been applied to the first of the twelve seat backs. This is a reproduction of the 1930’s Southern Railway green jazz moquette from the same era as the blue jazz in birdcage No. 3363 and Maunsell open third No. 1336. It was also the last moquette applied to No. 3363 in SR service on the big railway. 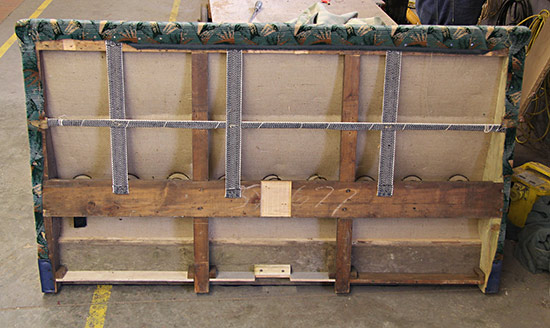 Rear view of the first completed seat. The row of springs are visible behind the horizontal cross member. The horizontal webbing is stitched to the hessian and is used to separate the seat back and head rest. 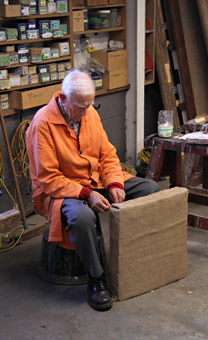 Following the overhaul of another of No. 3687’s 36 individual spring cushion bases Frank Ferris sews it into a hessian bag. Following this horsehair padding is added to the top, again covered by hessian before the whole is covered in moquette.

Dave Clarke’s first photo below shows the late Frank Ferris working on a seat base for Maunsell carriage 3687 in March 2014. The second photo shows the ninth seat base almost complete on 1 December 2013, with the front edge and hessian cover have been applied. Separate cushions are fitted on top of this sprung base. 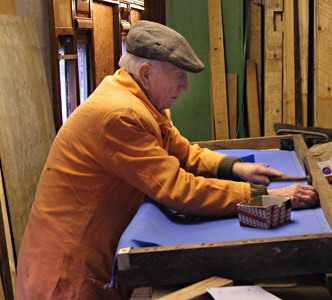 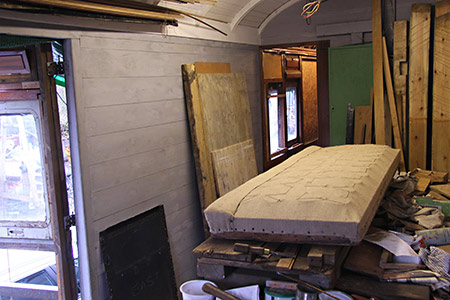 Just before Christmas 2012, the coach spent a couple of days on the pit so that a start could be made on setting up the bogies. Dave Clarke

Right: One of the seats obtained by David Wigley from the Severn Valley Railway is being stripped. Once the springs have been removed, the base will be cut down to provide the three aside seating required in the coach’s compartments. Dave Clarke

Below: Some additional pictures from November, provided by David Chappell:

The ceiling panels have been trial fitted to the lavatory vestibule end of the coach. Dave Clarke 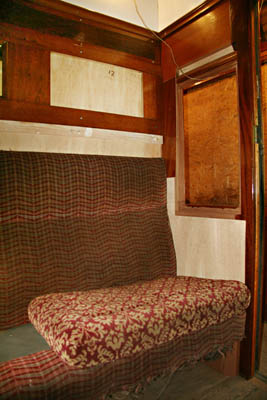 First trial fitting of second hand seats. These were recovered when their “original owners” went to the sidings in the sky. Dave Clarke

The corridor is looking more complete every month. Droplights have been fitted to five of the six compartment doors (on the right) and varnished panels below the exterior sidelights. Dave Clarke

Matchboarding in the lavatory. Dave Clarke

Matchboarding in the lavatory. Dave Clarke

Frank Ferris finds a novel use for the steam heat controller. Dave Clarke

The upper section of moulding has been fitted above the compartment doors. This conceals the main wire run. Dave Clarke

The internal fit out continues with the trial fitting of the view frames and luggage rack rubbing strips within each of the six compartments. Dave Clarke

Frank Ferris pins one of the new panels above the southern sidelight in Compartment C. Dave Clarke 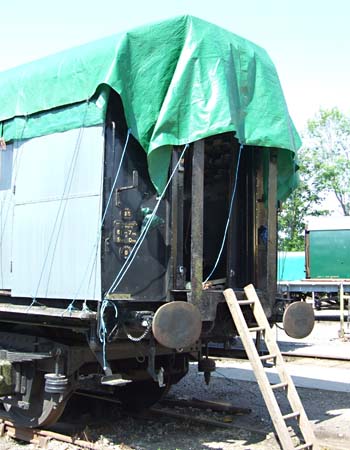 In spite of the lack of recent updates, progress has been maintained on this project, as seen in these photos taken at the end of June 2009 by Richard Salmon. That on the right shows that the gangway connector has been attached to the north end of the carriage (as has that at the other end), and the exterior panelling has been given a fresh coat of paint.The next major jobs on the exterior are to recanvas the roof and to fit the side-lights. The external teak frames for these are almost finished. Both of these jobs await access to the carriage works since they are not things which can be undertaken sensibly out of doors. The side-light frames have been manufactured in-house, using timber salvaged from old school lab benches; some of the interior timber-work has been sub-contracted off the railway, but no contractor could be found to take on the external frames.

The interior photos below show the new corridor partition (the coach has six compartments). This structure has been manufactured from a mix of recovered original material (a little of which survived in the departmental conversion) and new timber (some utile, and some salvaged aformosia, again from old lab benches). The veneered plywood panelling is mahogany below waist level and sycamore above, as per the original. The plywood above head-height is not yet fixed permanently in place, and will be painted white to match the ceilings, whilst that below will be varnished in the near future.

The sliding compartment doors have been hung – these are all originals from Maunsell stock, from a variety of sources. The next major internal work will be the construction of the compartment partitions – originally the design did not have complete partitions behind the seating, but will have in the reconstruction, which will strengthen the structure and improve fire protection. 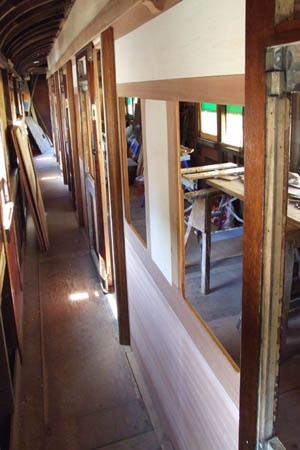 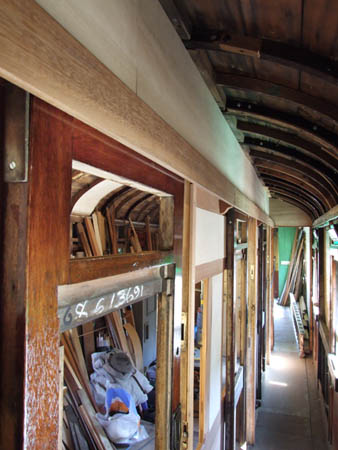 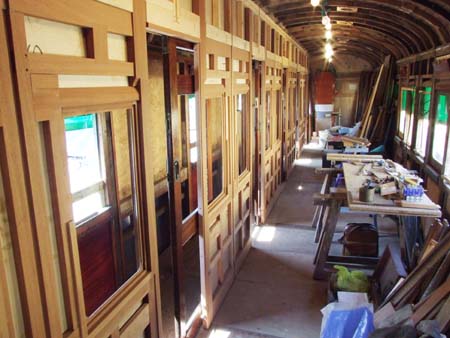 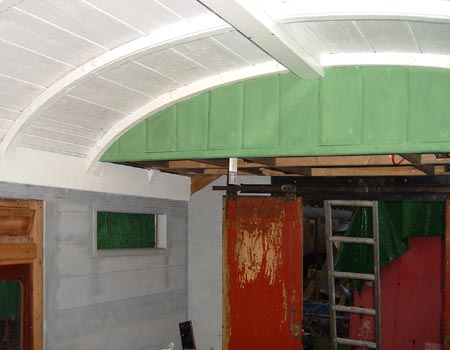 Over the last couple of years work has been progressing steadily on the interior of the coach. Here we see the interior of the brake van, with the reconstructed interior bulkhead, and refurbished ceiling and side planking. Of note is that due to the narrow vehicle width, the sliding door covering the gangway is bi-parting.

Below is the refurbished SR brake column from a BY van, salvaged when the van was dismantled to provide an underframe for a vintage coach body. The brake linkage has also been connected up underneath the vehicle.

Below right, the remainder of the brake van, with electrical trunking and light fittings in place on the ceiling. The brake doors, with all their interior woodwork and metalwork fitted, can also be seen. 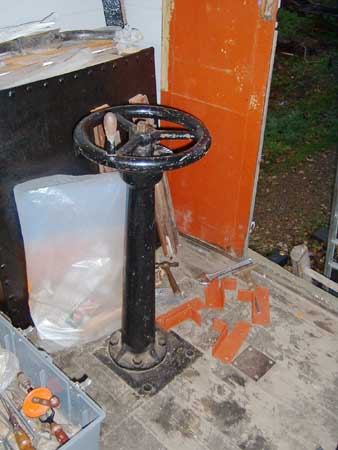 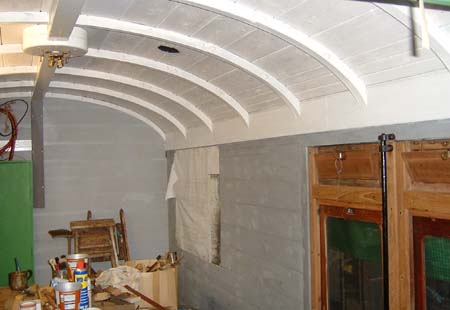 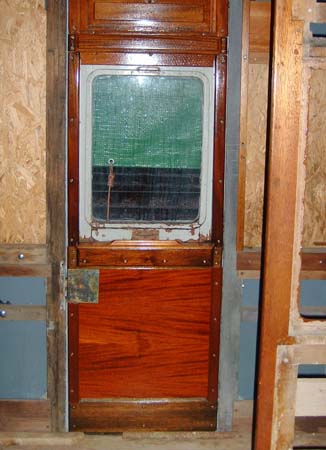 The passenger doors have now had all their interior timberwork overhauled, varnished, and fitted complete. The droplights will be replaced later. To the right of the photo can be seen part of the corridor partition at the non-brake end. This has been reconstructed from cut-down original partitioning which remained in the coach from its departmental conversion.

Below is the reconstructed and overhauled toilet partition. 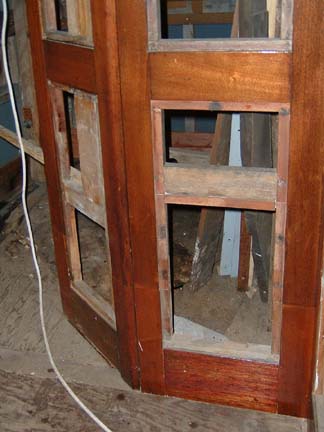 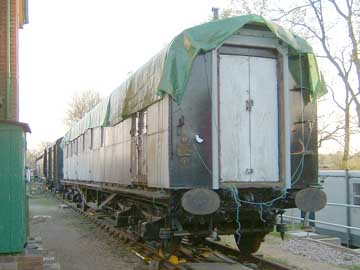 With all the steel panelling now on the sides and ends, the gangway structure is being built up, and butterfly control gear fitted at the north end.