News from the Trust 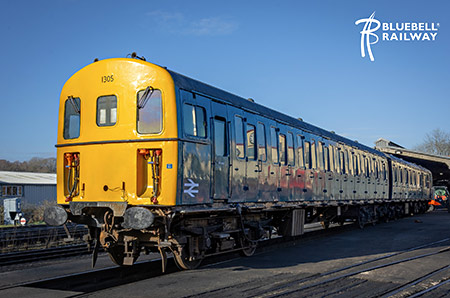 1305, which arrived at Sheffield Park on 19 January, is now owned by the Bluebell Railway, and is mechanically in operational condition. The interior and bodywork require attention, which the newly formed 1305 Oxted Thumper Gang, which includes people with experience of maintaining such units in their main-line days, plan to undertake over the next couple of years without calling on the services of the Bluebell’s C&W department. Further details of the units history are available via a new Multiple Unit stock list, covering the most important details and history of the two Bluebell-owned units. See also the Railway’s Press Release (16 January 2023) about the project.

To donate towards the costs of getting this 1962-built unit up and running on the Bluebell, please use the link buttons here, and choose “Oxted DEMU 1305” from the drop-down menu. 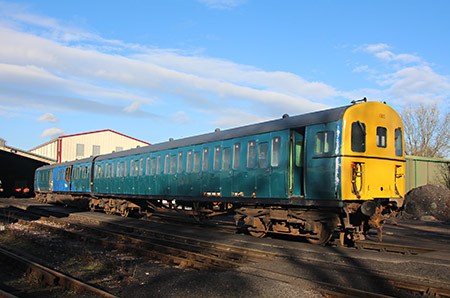 As a unit which was designed for and operated on the lines through Oxted from London to East Grinstead, it is local to our area and an important part of the historical story of the railways of Mid-Sussex.

The intention is that the unit will provide an economical means to provide earlier morning and later evening services than is possible using steam locomotives, to enable people arriving via East Grinstead to have a longer day at the Railway.

The photos, by James Cummings and Tony Sullivan, show the two parts of the unit re-connected at Sheffield Park. Once it’s been inspected and passed fit to travel on Bluebell metals, it will be transferred to Horsted Keynes up yard.

We’re pleased to present the new Bluebell Railway Trust web pages, to help keep Bluebell Members and supporters up to date with what’s going on, provide information about current fundraising, and useful resources such as the information about leaving Gifts in Wills to the Railway, via the Trust.

This initiative, launched in the Winter issue of Bluebell News and here on the web site, includes details of how, working with an online portal, LawEasier from local solicitors Mayo Wynne Baxter, Bluebell supporters can obtain a 25% discount on their online legal services.

To find out more, simply visit the new Gifts in Wills page.