The two photos below show the state of work on the overhaul of Pullman Car 54 at Horsted Keynes just days before work stopped with the lock-down in mid-March. Funding for its overhaul is ring-fenced in a restricted fund in the Bluebell Railway Trust, along with money contributed by the Department for Transport to enable wheelchair access, and work can therefore re-commence once the works re-opens. 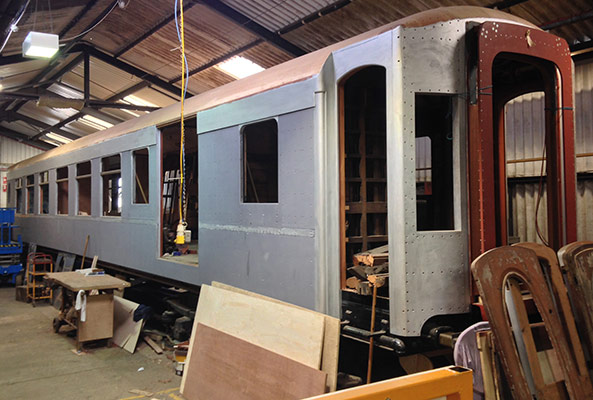 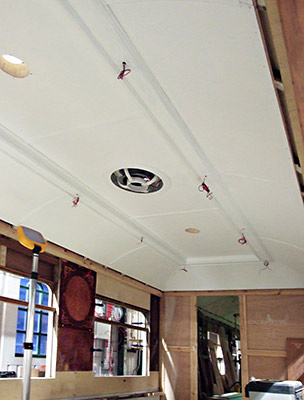 The two photos below show that the structural element of the rebuild of the body essentially now complete, and the wiring progressing in advance of the internal ceilings going up. The photos, taken on 14 December, show the exterior of the southern saloon and brake van end, and the inner ceiling of the northern saloon, which is formed of flexible ply on a timber sub-structure. 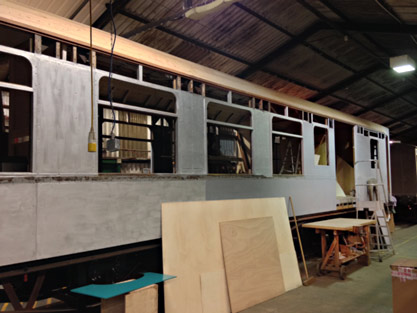 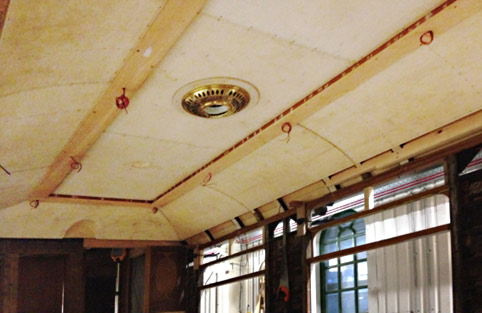 Car No. 54 was again shunted out of the carriage works and in to E-road in the maintenance area of OP4 (our big shed extension). The car was then lifted on the jacks to enable the missing braking system to be designed, and for the bogies to be swapped. Richard Salmon’s first photo below shows the car up on the jacks on 6 October.The second photo shows the carriage back in the works on 26 October. Recent work has included fitting the southern gangway faceplate and the buffers, with help given by the Alf Brown Group. Meanwhile work continues on the interior, with lighting runs included within the ceiling currently being installed. The fixing of the wheelchair lifts in the double doorways, and working out how they will be bolted down has not proved straightforward, but the pace of work generally continues to be impressive. 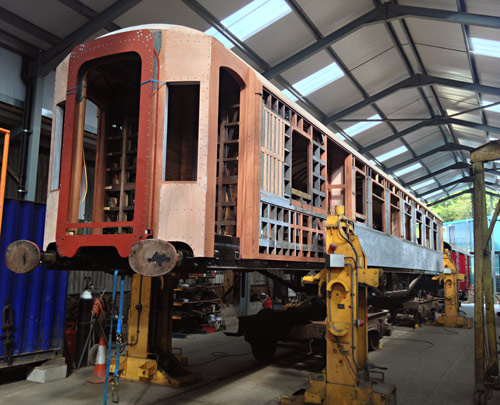 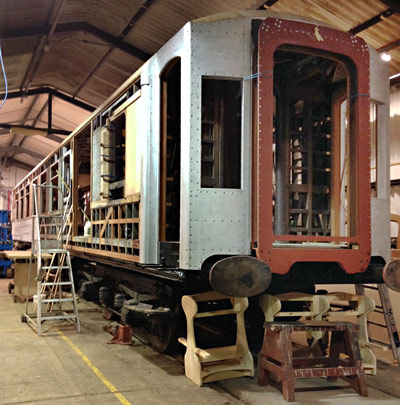 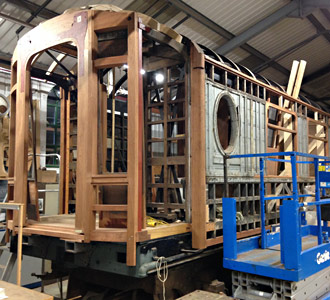 Here we see the north end of Pullman Car 54 in the carriage works, where the new end timbers are taking shape very nicely. All the timber is being prepared in-house. 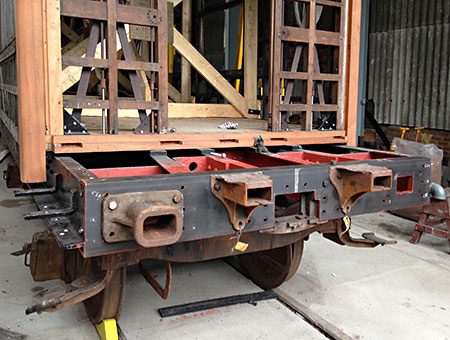 Two entirely new headstocks have been fitted (as seen in the photo on the right, designed to accommodate a suitable set of buffers we had available in place of the damaged originals. 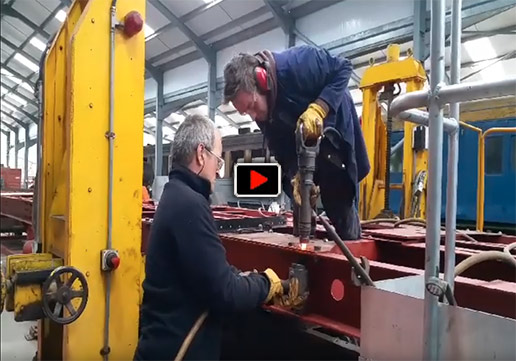 Pete Sulsh’s short video shows one of several hundred rivets required in the repair of the underframe of Pullman Car No.54.It was raining heavily that day, and the new “Operation Undercover Phase 4” (OP4) maintenance shed at Horsted Keynes was thus a huge benefit! 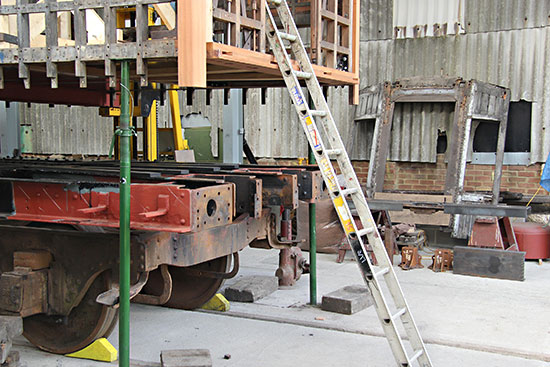 By March 2018 the underframe was ready to be shunted back under the body, although the new north end headstock was still to be fitted at that stage. 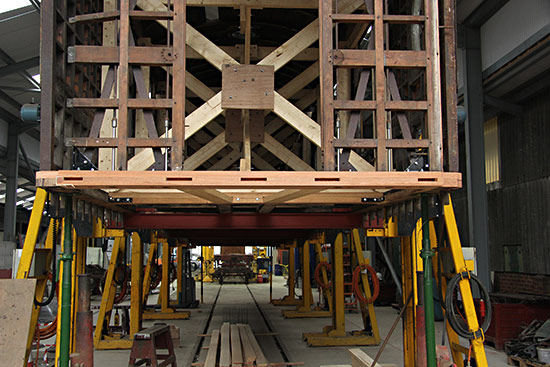 The Pullman has been shunted into the northern end of the maintenance road where the body has been lifted off the underframe. A start has been made on replacing the life expired transverse beams at the northern, or lavatory end (photo Dave Clarke). The lowest layer of floorboards have been removed and the old horsehair replaced with modern insulation board and new softwood timbers. Bracket and bolt corrosion is being tackled. 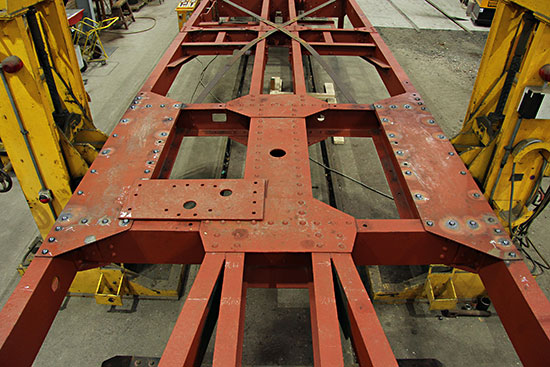 Some new steel plate is being riveted onto the underframe (as seen in Dave’s photo below) and the majority of the underframe cleaned and is being painted. The bogies will be treated later.

If you look towards the top of the photo you will see the first lengths of the cross bracing that runs down the underframe. This all needed changing, but proved a challenge as its under quite a bit of tension. By riveting it in the centre to secure it, then heating the brace with an oxy-torch until it expanded, a second person welded it to hold it in position at the end. It was then drilled and riveted on the outside ends.
As it cooled you could see it pulling the underframe back into its proper shape. 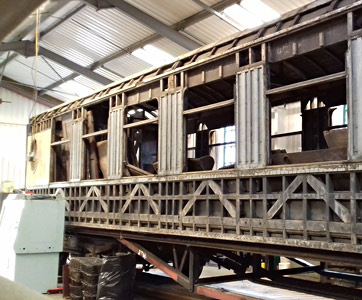 David Jones’ photo shows Pullman Car No.54 in the carriage works for inspection to enable detailed planning for its forthcoming overhaul. Further details are available in the 4 September 2016 edition of our e-Newsletter.

The Railway has been awarded £75,000 from the Department of Transport’s Heritage and Community Rail Tourism Innovation Competition towards the overhaul of Pullman Car No.54, to cover the costs of providing wheelchair access.
View our press release

In preparation for its overhaul, Pullman Car 54 has been turned round.