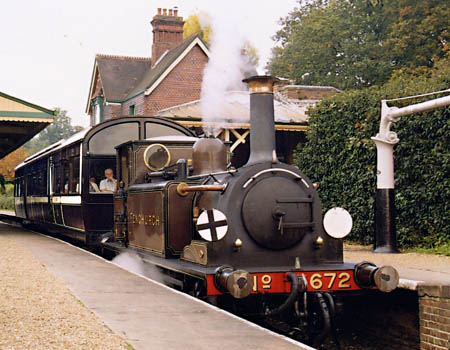 In early December 2019 ‘Fenchurch’ entered the Locomotive works, was dismantled to remove the boiler for assessment, and the remainder of the locomotive reassembled for a return to public display in the locomotive shed. The aim is to have it running for its 150th anniversary in 2022. You can follow its current overhaul, here.

During its 2001 overhaul ‘Fenchurch’ was converted back to represent its original A1 rather than A1X form, seeing it return to service in February 2001, giving ten years of pretty reliable service.

Stroudley’s famous Terriers survived for decades after more modern designs had been scrapped, working on lightly laid Branch lines. ‘Fenchurch’ was sold to the Newhaven Harbour Company, being light enough to cross a bridge within the docks. It came back into Southern Railway ownership, and continued to work at Newhaven for many years. It came to the Bluebell in 1964, having been for a number of years a celebrity as the oldest locomotive working on British Railways. 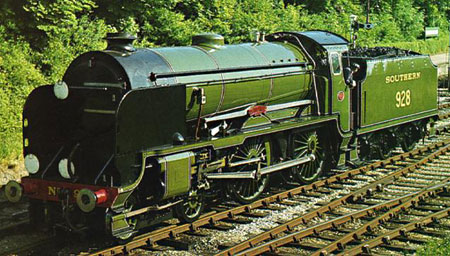 The final development of the classic express 4-4-0, the Schools class were designed originally for the Hastings line with its restricted loading gauge, but proved themselves capable of hauling the Southern’s top expresses along side larger engines on the railway’s other main lines, and “Stowe” was built for the London-Portsmouth run. Bought from British Rail by Lord Montague, it was for a time displayed at his motor museum at Beaulieu, before moving to the East Somerset Railway in 1973 and the Bluebell in 1980 where it was rapidly restored to working order. Following expiry of its boiler certificate, it was been stored awaiting its turn in the workshop, in need of some very major (i.e. expensive) boiler repairs.

In September 2000 it was bought by the Maunsell Locomotive Society, so securing its future on the Bluebell. The team that rebuilt the tender for No.1638 then completed the major rebuild of Stowe’s tender, and the locomotive was repainted into Southern Railway Bulleid-period Malachite Green livery to ring the changes for the subsequent period when it was on display in the loco shed. In 2013 a start on the overhaul of the locomotive was made, with fund-raising also very much to the fore, since this will not be a cheap overhaul. The physical work on the overhaul became very visible in December 2013; until this point the locomotive had been kept in a displayable condition. You can contribute towards the boiler overhaul of this and other locomotives via our “Keep Up The Pressure” appeal. 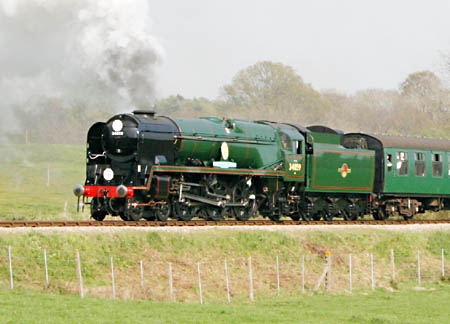 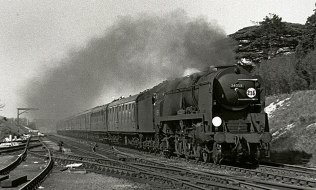 The identical “West Country” and “Battle of Britain” pacifics were built to provide increased power for use on the Southern’s secondary main lines, especially those in the West country with weight restrictions. However, some of Bulleid’s novel ideas, designed to reduce maintenance costs, proved troublesome. Therefore in 1957 a programme of rebuilding the locomotives along conventional lines was started. The rebuilding of the Bulleid light pacifics added several tons to their weight, but produced, to all intents, brand-new locomotives, whilst retaining the distinctive light-weight Bulleid-Firth-Brown wheels and his superb free-steaming boiler, along with many other of the successful innovative design features.

Rescued from Barry scrapyard in 1979 without a tender, this locomotive has since then been the subject of ongoing restoration work and fundraising. A tender underframe was salvaged from a steel-works, the original intention being to use this in conjunction with a new body. However this underframe was in poor condition, and in the end only some fittings from it were used, with the tender frames being constructed at Sheffield Park from new material. A new 5250-gallon tender body has been made, and placed on it.

The formal launch into Bluebell service, as the first rebuilt Battle of Britain to steam in preservation, performed by Viscount Thurso (grandson of Sir Archibald Sinclair, who was the wartime Secretary of State for Air from 1940) on 24th April 2009. Regretably, the loco was withdrawn during October 2011, in need of further major firebox repairs; the construction of a new firebox has been contracted out, and once the boiler work has been completed a new 10-year certification period will commence. More details here. 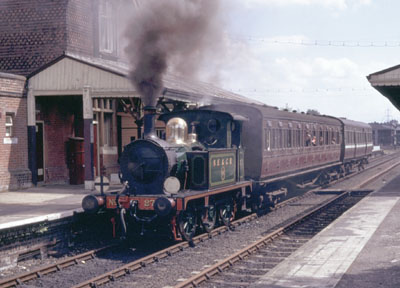 The P-class tank locomotives were, in design terms, an updated copy of the LBSCR Terriers. Coming to the Bluebell in 1961, for two years it carried the name “Primrose”. In 1963 it was repainted into full SECR passenger livery, and, with No.323, was a mainstay of the Bluebell’s operational fleet for much of that decade.

No.27 was dismantled in 1978 for a “quick” overhaul, but, as was so often the case at the time, this was found to be beyond the skills of the basic workshop capability we had back then, so the restoration stalled.

The restoration of 27 to working condition re-started in 2011 following a delay of over 30 years. The work on the locomotive is being undertaken by the Villas Gang and other volunteers, supported by the fund raising efforts of the ‘Fenchurch Fund’. Major work is required on the boiler and frames of the locomotive, the replacement of the cylinders, as well as some significant mechanical renewal and replacement of plate work, including the tanks. 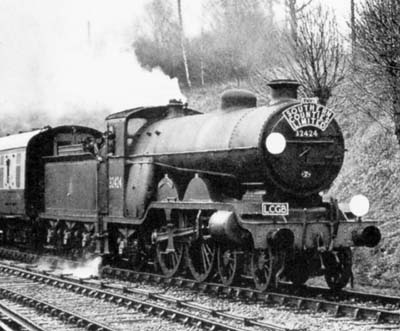 This is our project to reconstruct a Brighton H2 Atlantic based on SR/BR period “Beachy Head”. It is based around a suitable boiler which was obtained some years ago, and the project is now moving ahead rapidly, with a building constructed to accommodate the components, the frames cut, wheels cast, cylinders and valves fabricated and fitted, motion made and fitted, such that the rolling chassis is nearly complete, as is the tender chassis. Various other original H2 components have been given to the project, including the locomotive’s original regulator handle, and a class identification plate. 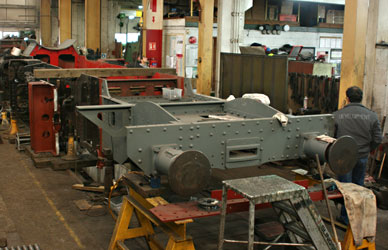 The photo by Tony Sullivan shows the loco’s frames welded to the new rear section in the Bluebell’s workshops in December 2011, and thus 84030 can now be said to exist.

The 2MT locomotives were built for light branch-line work. The tender engines, as this loco was originally, were almost unknown even as visitors to the South, whereas the 2MT tanks were used extensively on the Southern Region. Thus, when this loco was rescued from Barry scrapyard without a suitable tender being available, the decision was taken to restore the locomotive in the tank-engine form, of which there are no surviving examples. The last 2MT tank having been numbered 84029, this locomotive takes the next number in the sequence.

The loco will be very useful on the Bluebell, since it will be capable of hauling all but our very heaviest trains. The project is making good progress, and news reports are available here. 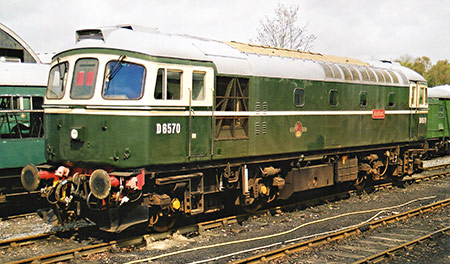 Jonathan Horrocks’ photo taken at Tenterden in April 2000 shows D6570 ‘Ashford’ at its previous preservation base, on the Kent & East Sussex Railway.

Class 33 locomotives were not just a specific Southern Region class, but were closely associated with services at East Grinstead in the early 1960s, and were still working peak-hours East Grinstead – London Bridge trains in the 1980s. The Bluebell having concluded that a thunderbird and dry weather/fire-risk cover locomotive was required, a group of Bluebell Locomotive Department members purchased this locomotive – see pdf document with full information/news release here.

On arrival at the Bluebell Railway, it has not entered service immediately, but the new owners (who also own and maintain shunter D4106) are implementing a re-commissioning programme to ensure the locomotive is reliable before being made available for service, and at the same time will undertake a number of bodywork and roofing repairs to make the loco weathertight. It will be hired for use on the Bluebell on an as-required basis.