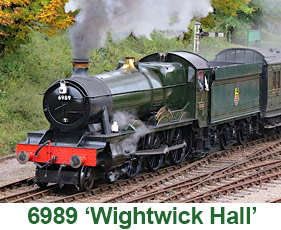 The Loco Roster provides details of which locomotives are expected to be running on which days. 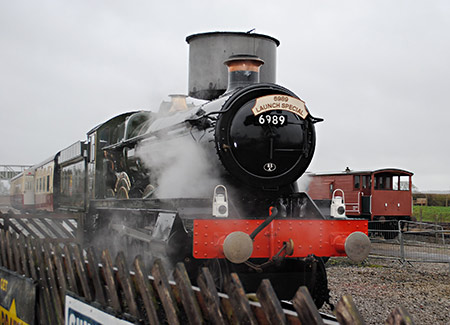 
Arriving on loan to the Bluebell Railway on 23 June 2022, and expected to stay until after Giants of Steam, ‘Wightwick Hall’ spent its working life around Hereford. and Gloucester. It was withdrawn in June 1964, and was one of the locomotives saved by being sold on from Barry scrapyard, moving to Quainton Road in January 1978, and restored to operational condition over the following 40 years. 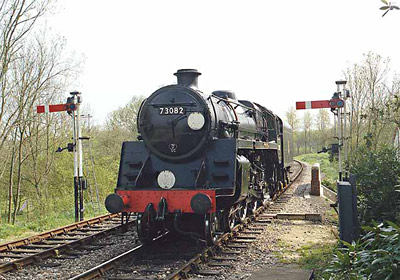 One of the range of “Standard” locomotives designed for British Railways, the basic design took as its starting point William Stanier’s LMS Black Fives, but with larger wheels and cylinders, and a higher running plate. The first 30 were built between April 1951 and January 1952. No. 73082 was part of a second batch, of 100 locomotives, built 1953-57.

Modern engines with roller bearings, highly capable and easy to maintain, they were withdrawn long before they were worn out thanks to BR’s rush to get rid of steam in the 1960s. ‘Camelot’ was one of the Southern Region’s allocation of Standard 5s, and when the King Arthur class, which they replaced, were being withdrawn, a staff suggestion led to the names being transferred to the new engines.

This locomotive is believed to hold the record for the highest speed for the class, at 107 mph (on Christmas Eve 1964, near Andover). With a late-night parcels train and a driver keen to get home in time for a party, the 36 miles from Salisbury to Basingstoke was completed in 28 minutes start to stop, an average speed of 77.1 mph!

A survivor of Barry Scrapyard, ‘Camelot’ is the only remaining one of the named Standard 5s. It was returned to working order thanks to the dedication of the Camelot Society, which carried out fund-raising and engineering work. The latter included the construction of a brand-new tender body, fitted to frames recovered from a South Wales Ironworks, since, like so many Barry locos, it had lost its tender. It was a core member of the Bluebell’s loco fleet for the decade after it returned to traffic in 1995.

In preparation for its next overhaul, the Camelot Locomotive Society prepared the loco for the boiler lift, major work was undertaken on the wheelsets and the roller-bearings, the boiler received heavy repairs off-site, and the overhaul and painting was completed in October 2015.

To mark 60 years since 73082 was constructed at Derby in 1955 (although relaunched complete with its nameplates at the Giants of Steam weekend in 2015) it ran for the following year without nameplates, to mark this anniversary. ‘Camelot’ received its nameplates at Eastleigh works in August 1959, whilst still carrying the early BR tender emblem, and now carries them again.

At the end of 2020, with the country entering a third Coronavirus lockdown, the opportunity was taken to carry out some remedial work on ‘Camelot’ in the Bluebell’s workshop. A problem had arisen with leaks at the foundation ring rivets, and to allow these to be replaced, the boiler was lifted. Although there were still 4 years remaining on the boiler ticket, while it was out of the frames other work was carried out as necessary, including partial retubing, gaining a new 10 year boiler ticket.

You can see news of this locomotive on the owning group’s Facebook page. 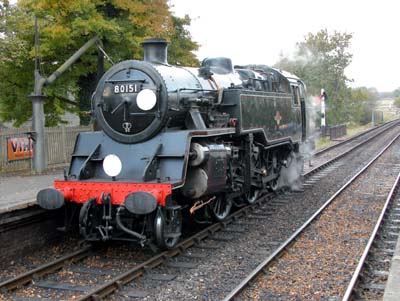 
The 4MT tank locomotives were closely linked to the last years of the Bluebell line, and although the last Brighton-built locomotive, 80154, escaped preservation, the Bluebell now plays host to three other members of the class, all one-time residents of Barry scrapyard. 80151 arrived from another preservation site in 1998 and returned to steam after the completion of its overhaul in the Bluebell’s workshops in October 2001. Additional boiler work during early 2011 saw its operational period extended to May 2012.

Its latest overhaul, which cost over half a million pounds saw, along with routine heavy maintenance and boilerwork undertaken in-house, new tyres fitted to the driving wheels. 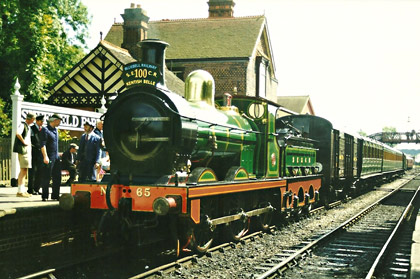 
Built at Ashford as an “O” class locomotive, it received a rebuild to class “O1” in 1908, and ran on until finally withdrawn in 1961. In 1963 it was obtained by the late Mr Lewis-Evans and kept at Ashford Steam Centre until its closure. Thereafter its location was something of a mystery until it was brought to the Bluebell Railway for overhaul, and was returned to steam for the centenary of the amalgamation of the SER and the LCDR in August 1999.

0-6-0s were the commonest locomotives in this country, and the Bluebell now hosts a sequence of three unique survivors of this type, demonstrating their development through the first half of the 20th century, from the O1 through the SECR C-class to Maunsell’s Q-class built by the Southern Railway.

The Bluebell’s spare O1/H boiler was overhauled at The Flour Mill workshop, and has now been fitted in place of its previous boiler during the recent overhaul, which took place at Sheffield Park. 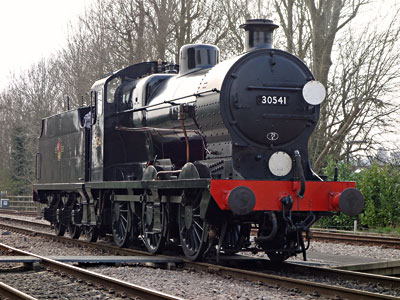 
Built as a basic goods engine to replace life-expired pre-grouping locomotives, this was Maunsell’s final design as Chief Mechanical Engineer of the Southern Railway. It could be described as a competent though not outstanding engine. Bulleid, Maunsell’s successor, improved the draughting arrangements with a multiple blast-pipe arrangement and new chimney, and it was in this condition that 541 was withdrawn from service in 1964. Sent to Barry scrapyard, like many other locos there it escaped the cutter’s torch and was bought by preservationists.

In 1973 it was moved to Ashchurch in Gloucestershire and moved on in 1978 to the Bluebell, where its owning group merged with those of U-class No. 1618 and S15 No. 847 to form the Maunsell Locomotive Society. The blast pipe and chimney arrangement have been further modified using BR Class 4 components, in the same way as BR had done to some of the class. This has the advantage of returning the locomotive visually to very close to its original form. Major restoration work saw it return to steam in 1983, operating for the following decade in Maunsell livery as No. 541.

An overhaul started in July 2011, and the Loco Works Working Group, who started by overhauling the tender, have also assisted with work on the loco itself. It returned to service on 28 April 2015, carrying BR livery as No. 30541, and received a major valve and piston exam in 2017. 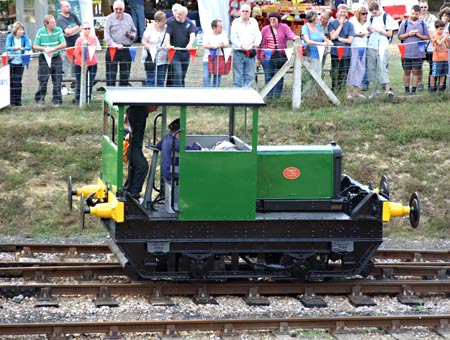 
Built by Howards in 1926, No 957 was used to shunt their agricultural implement and railway wagon factory sidings in Bedford. The Britannia Iron & Steel Works Ltd took over the site in 1932 to make pipe fittings and continued using it until a larger shunting loco was obtained in 1965. Through the intervention of a local enthusiast the company presented 957 to the Bluebell Railway where it was used for light shunting until about 1969. Under the auspices of the Alf Brown Group an overhaul (details of which are here) was begun in the 1970s at Horsted Keynes which had to include new wheelsets, and it made its debut at the 50th Anniversary Gala in August 2010.

Although nominally operational, at the present time more work is required to complete the restoration of the locomotive. 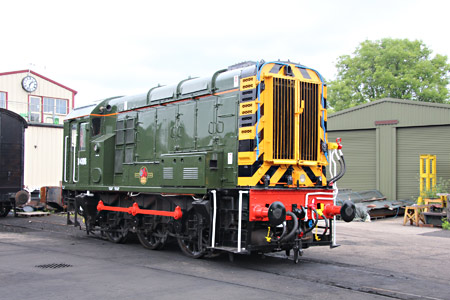 350HP Diesel shunting locomotive No. 09018 was purchased by a consortium of members who have set up a company to manage the loco, which is hired by the Railway as and when it is needed.

The 09 class of diesel-electric shunters were a Southern Region version of the ubiquitous 08 class, geared for slightly higher speeds. D4106 was built at British Railways’ Horwich Works on 13 November 1961. It was renumbered as 09018 on 31 December 1973. On the Bluebell it initially retained HNRC orange and grey livery, with the lettering removed, since the priority was the acquisition of a pool of spare parts.

Tony Sullivan’s photo shows it on 8 June 2017, soon after being repainted the previous month into its original BR Green livery with wasp stripes, numbered as D4106. 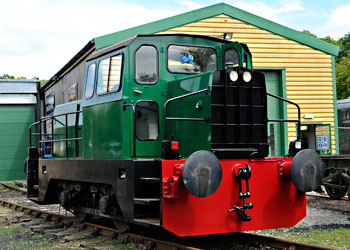 Acquired by the Bluebell Railway’s C&W department mainly for shunting work around the carriage yard, this loco arrived on 7th May 2010, in working order.

A Sentinel designed loco, this one was built after the company became known as Rolls-Royce and is their No. 10241 of 1966. However, the loco was rebuilt by Thomas Hill (Rotherham) in 1973 (who had by then acquired the Sentinel/Rolls-Royce locomotive business), becoming their No. 247V.

The Locomotive Roster indicates which locos should be working our trains on what days.

Note: Boiler Certificates. Steam locomotive boilers are certificated by our Insurance Company’s inspector, initially for seven years from the date of pressure testing after overhaul. The dates given above assume that a mid-term boiler examination/test allows an extension to a full ten-year term. In addition boilers require an annual inspection which they must also pass to remain in use. The mechanical condition of the locomotive may also prevent it attaining the potential 10-years. At the end of this period, unless a futher short extension is granted, the locos must be taken out of service for a boiler overhaul including a complete re-tube, and detailed inspection of the entire boiler and firebox, which will usually require the boiler to be removed from the locomotive’s frames. It is also usual at this time to undertake a full mechanical overhaul.