Fred Bailey provides an update on recent activities on the Atlantic.As we are in effect all under a form of house arrest at present this has proved an ideal opportunity to update you all on Atlantic progress.

The main work this winter was meant to be completing and fitting the boiler clothing sheets that protect and keep the insulating material in place now that the boiler itself has passed its hydraulic test. Unfortunately however, the winter having been so wet we have been unable to do anywhere near as much as we would have liked of this work. The boiler being outside does not help as these sheets need frequent trips to the boiler to check for their fit especially where holes need cutting to clear all the various parts that protrude through them. In the case of the firebox, these are mostly washout plugs and washout doors. In the main the backhead clothing is complete as are the sheets covering the firebox, but we still need to fit the curved sheets that go between the backhead and the firebox top and sides. The sheets for the boiler barrel are on order but are now likely to be delayed by the flu virus pandemic. Likewise all work on site has had to stop for the same reason.

The tender being inside has progressed fairly well helped a lot by our now having a new member to our team now retired and looking for work on a real engine rather than those of Maunsel’s design! So welcome to the team Melvyn Frohnsdorff.

Below: In lieu of a seat we have added two cupboards behind the driver. The lower one contains the vacuum air proportional valve for the braking on the tender and the upper one contains a vacuum reservoir gauge and an air reservoir gauge, together with the vacuum release valve. The gauges are there primarily for fault finding purposes. The glare in the picture comes from the new LED type tube lighting. (Note to self “Must remember to turn them off before taking photos in future”).Next we see the tender beading that goes all around the flared top of the tender and the start of work on the coal rails and coal retention plates. (On the original Atlantics these latter items were added in Southern times). 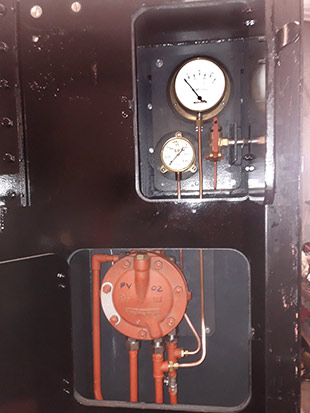 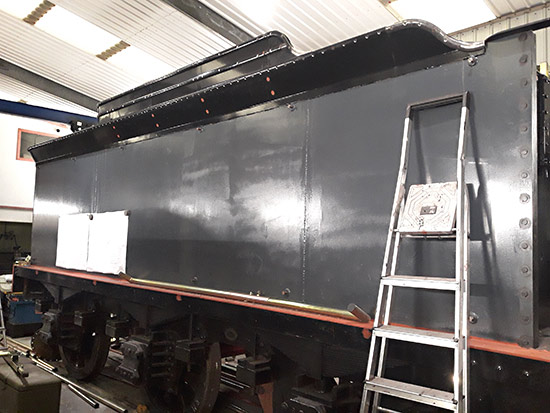 Below: The next 3 photos are of Keith’s handiwork “hot setting” the D shaped steel used for the beading and the coal rails. This first being the front of the coal rails where they dip down to the tank top.Where the beading goes around the rear corner of the tender tank. An awkward shape to achieve. In effect a 90° bend, but with the top edge at an angle of 60° to the bottom edge. 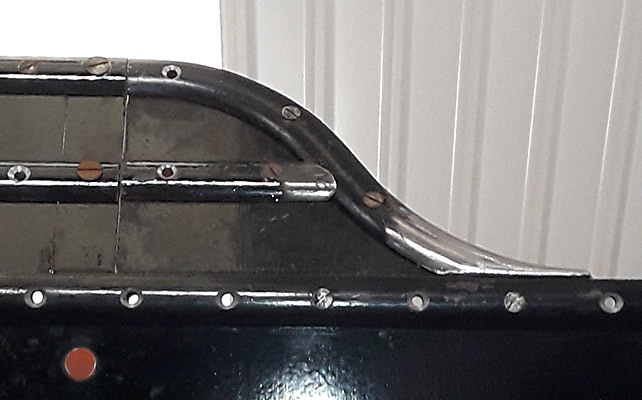 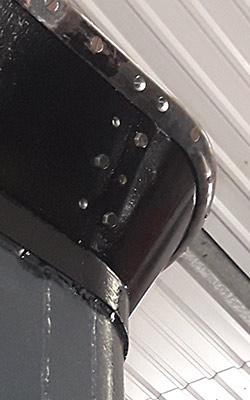 This third photo shows where the beading then drops through a reverse curve from the top of the rave down to the tank top. The bottom part of it has to then be pulled out by about 30° so that it will lay flat on the outside cladding sheet (which is yet to be fitted) all the while being in contact with the flared tender top.Finally we have one of the pair of safety links that go between the engine and tender either side of the main draw-bar. The shackle hanging at the bottom is the one that will be attached to the tender. 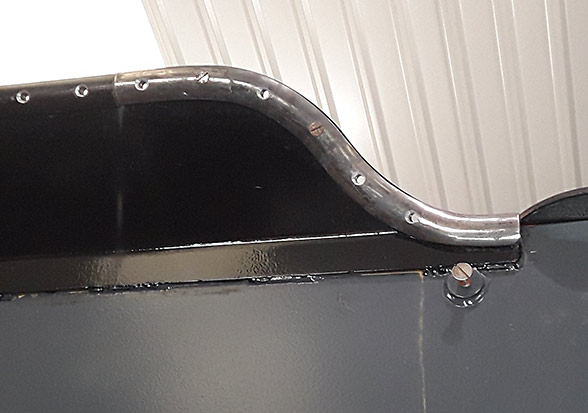 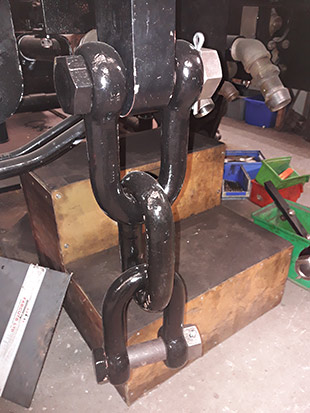 A very happy Fred Bailey provides the following update!Well a major milestone has been reached with our Atlantic project, and I must admit we are all relieved and excited by the prospect of our target of finishing the engine, being now one major step forward. Sorry to say it will not be running soon, but our unofficial target of Summer 2021 is possibly fairly realistic given no major un-forseen circumstances getting in our way. 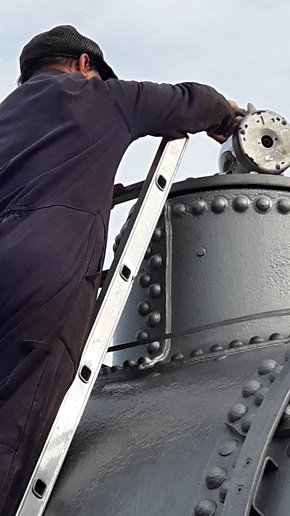 YES, THE BOILER HAS NOW PASSED ITS HYDRAULIC TEST.

After a lot of work over the past few years on Tuesday 29 October the boiler was given its hydraulic test, witnessed by the Boiler Inspector. We have spent quite some time working towards this day and fortunately the day was dry (so that any leakage may be seen) and not too cold. The test pressure was raised by use of the main works’ pneumatic water accumulator pump and once at the test pressure the pump was stopped.

In an hour or so the small insignificant weeps here and there (that will almost certainly take up when hot and the metal has expanded) made virtually no discernible indicated difference in pressure on the test gauge. Work can now continue on the boiler clothing, something that will take quite a lot of time especially if we get a hard winter. We do have a whole raft of work indoors too on the tender.

The photo on the right… Obviously before testing the boiler has to be completely full of water with all high spots bled of air, however our shed is some way from any water supply so we had to do the best we could. Here is Tony filling the boiler. It took quite some time!

The reason that the safety valves do not work on the test is that we have a special clearly marked set of safety links that are short enough to gag the valves. They will be changed before the valves are assembled properly with their springs. 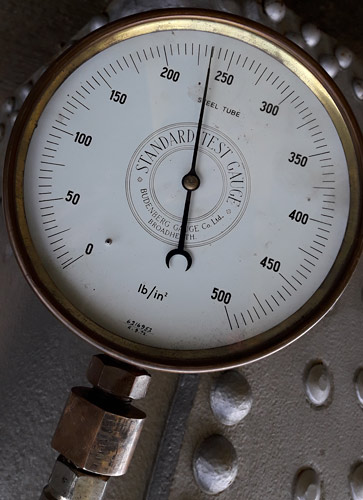 Right: The test gauge on the boiler sitting at the test pressure, with the pump disconnected.

In Atlantic House the tender tank has been lowered on to the chassis and is in the process of being bolted down. We had another little success here too. We fitted the 26 one-inch Whitworth studs into the bushes welded into the tender base by the tank fabricators in Gloucester, and they all went through the holes in the chassis with no problems or damaged threads. Not bad considering there was only about 1/8″ clearance in the holes for the studs, the holes possibly having been there since 1901 or so.Work is continuing on the boiler cleading sheets and tender at the same time. The boiler cleading progress could possibly be hampered by adverse weather the boiler being outside, but the tender ensures that plenty of indoor work is available.

Matthew Cousins’ photo below shows the new tender body as initially sitting spaced off its modified ex-LBSCR chassis, soon after it was moved into Atlantic House back in August. The all-welded tank is painted inside and out with 2-pack epoxy paint, but this will be concealed by the riveted external cladding. 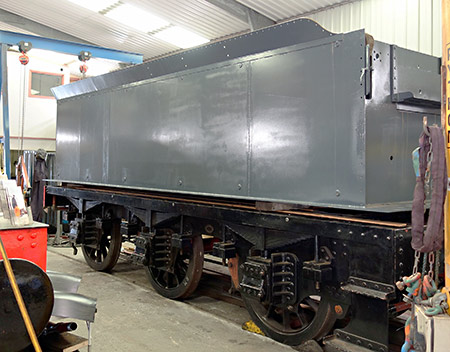 A short update on the Atlantic’s tender tank, which was delivered to us on Wednesday 24 July. It still has to have an outer skin fitted around it, and all the coal rails, cab doors, etc, added.We start with a couple of earlier photos, kindly provided by D G Welding, showing more of the construction details.

Once we have completed some more work in Atlantic House, the boiler will be moved out of the way, and the temporary track laid to enable the tender chassis to be brought out of our shed so that the tank can be placed on the chassis. After pushing the tender back into the works, our temporary track will be lifted and the boiler returned to its spot ready for its hydraulic and steam tests.We are still progressing with fitting the boiler clothing sheets at present which is always a long and taxing job to do neatly. They will of course be removed for the tests to be carried out, but hopefully the time spent now will be saved off of a running test certificate later. 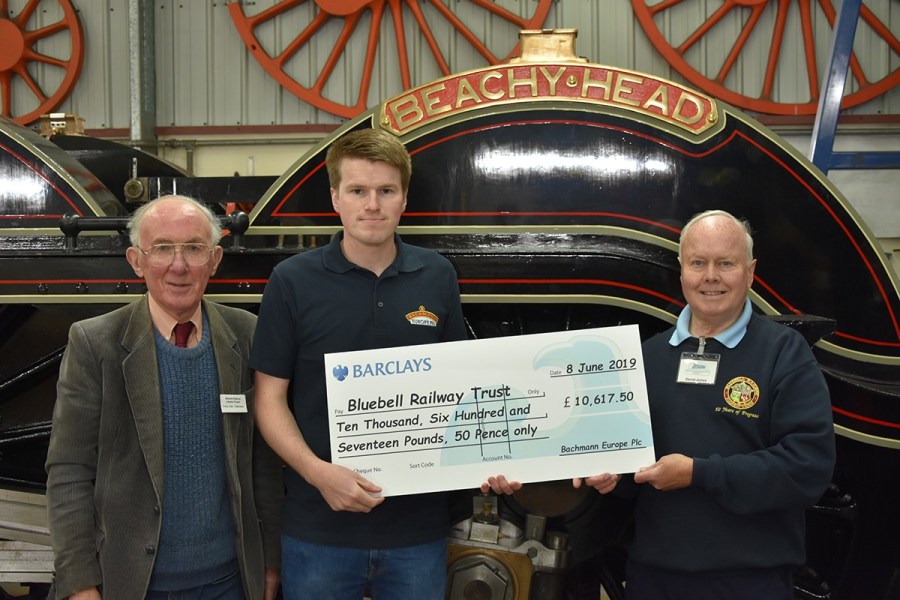 Bachmann’s website carries a report on the presentation of this cheque to help complete our H2 Atlantic ‘Beachy Head’. Do also watch this video on that page too.On Saturday 8th June 2019, Bachmann Europe Plc visited the Bluebell Railway during its Atlantic House Open Weekend to present a cheque for £10,617.50 to the Bluebell Railway Atlantic Group. Following the release of the acclaimed Bachmann Branchline OO scale model of the H2 Class Atlantic locomotive in 2018, the donation was made in recognition of the assistance provided by the group during the development of the Branchline model.

An update on progress, thanks again to Fred Bailey. The photos of the tender tank construction have all come courtesy of D G Welding in Gloucester, who are making a good job of this work, and it is likely to be delivered earlier than initially expected.The most major work at present is indeed the construction of the tender tank. Once the basic shell is finished it will be shipped to the railway for us to complete. A large amount of work will be involved here, as the tender tank has to have another skin fitted around it, and all the coal rails, cab doors and a myriad of other features need making and fitting. We start with pictures of progress on the tender tank. 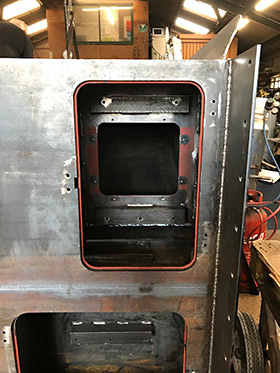 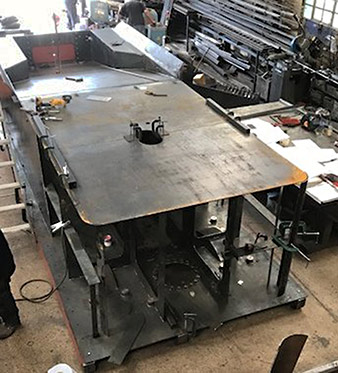 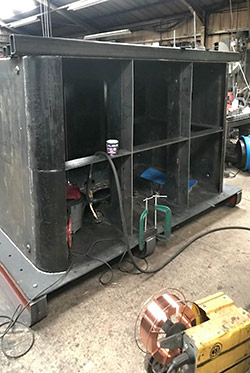 There is an auction at 2.45pm on Sunday, with a large number of high quality LBSCR photos (13 lots with an average of 100 photos in each lot.) The albums are of grouped subjects rather than miscellaneous, e.g. locos classes C, C1, C2 and C3. We also have a replica King class numberplate, lamps etc. Viewing is from Saturday morning, and the team will accept commission bids if you’re unable to be there on the Sunday afternoon.

Fred Bailey updates us on work on the boiler and the tender.

Most “Brighton” tenders, like the tanks on their tank engines, are double skinned. This is basically a second tank that wraps around and is bolted to the inner actual tank. It has the advantage of hiding the quick crude riveting on the original tenders or of any rippling of our welded one. This feature may well have been of an advantage as an insulator for all the tanks fitted to locomotives that condensed their exhaust steam to be used as a warm feed to the boiler via a hot water injector or a Weir or similar boiler feed pump.

Inside Atlantic House, the ashpan is under construction and a big pile of timber has arrived ready to start making the cab floor. With the tender tank not yet ordered we are working on a range of fronts until such time as the tender tank is delivered. At best this might be in July.

A fund raising appeal for the money required to complete the project was launched in 2000, and a combination of gifts made via the Bluebell Railway Trust, and standing orders set up to provide a steady income to the project have provided funding for the present work. However, more is still needed to complete the project, and the best way in which you can help is by setting up a small, regular, standing order to the Bluebell Railway Trust under Gift Aid, since this enables the Trust to reclaim the basic rate tax you have paid, and (if you are a higher rate tax-payer) enables you to reclaim some tax as well.

Would you like to sponsor a specific part of the locomotive? The latest component list is available, from which you can choose a wide variety of important parts of the locomotive. You may prefer to use the combined Sponsorship and GiftAid form available as a pdf.

A combined Donation, GiftAid and Standing Order form is available as a pdf document.