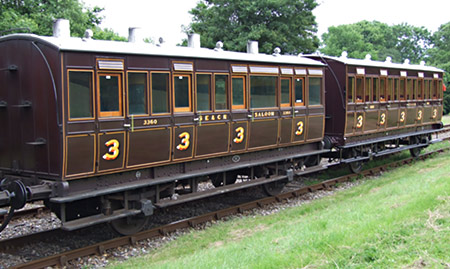 We have a large and diverse collection of rolling stock on the Bluebell Railway, built up over the years since we started in 1960. These include gems such as the Metropolitan Railway stock, which is the only close-coupled standard-gauge train in the country. We have six Pullman cars, from the 1920s and ’50s, an unrivalled collection of old LBSCR, SECR, LSWR and Southern Railway carriages, plus the unusual and unique 1913 built LNWR Observation Car and the venerable Great Northern Railway Directors’ Saloon.

Two old London Brighton & South Coast Railway carriages have been restored to traffic after 68 and 80 years out of use, and another two are currently being restored. All four were recovered after more than half a century as dwellings, and have been mounted on suitably modified underframes.

Passenger rated stock is that which could be included in passenger trains. It includes luggage vans, carriage trucks, horse boxes, perishable produce vans and milk tankers.

The list shows vehicle number, type, (building date), and alternative numbers carried at various times in the vehicle’s history. Links from coach numbers are to photographs and full details of each vehicle.

Other documents provide an Introduction to the Carriages, a Review of the Carriage Fleet, and a Stock List of our Wagons.

(all are Restriction 4 (i.e. 9ft wide), unless stated otherwise)

LBSCR 949 – the restoration of this 1881-built brake third, rescued from a farmyard, is nearly complete.
LBSCR 328 – another grounded body under restoration, and like 949 now mounted on a rebuilt SR van underframe.
Pullman 157 “Car 54” – a major project, including the provision of wheelchair access to our Pullman train, this is a 1923-built Pullman Brake carriage.
SR Maunsell 3687 – a Hastings-line brake third, originally brought to the Bluebell to provide spare parts for other restorations, this became a restoration project in its own right. Now moving towards completion.
BR Mk.1 TSO 4754 – an early example of a Mk.1, this carriage came to the Bluebell from the Bicester Military Railway, and is having a thorough overhaul before it enters service.
BR Mk.1 Saloon 5034 – End-structure overhaul complete, now receiving internal refurbishment.
BR Mk.1 RMB 1838 – End-structure overhaul undertaken by external contractors.

SR Van C 404, receiving floor and side-planking renewal at South end.
LBSCR Van 270 – following restoration of its bodywork, and the replacement of its wheelsets, a redesign of its brake gear has been necessary, and the work on the brake gear is now underway to make the van operational.

The Carriage Exhibition at Horsted Keynes is well worth a visit, and includes a viewing gallery in the carriage works, at the south end of platform 5. Donations collected are now being put towards the eventual overhaul of the SR Maunsell Restaurant car No.7864, and the provision of more urgently needed overhead cover for our carriage stock.On Platform 1 at Horsted Keynes, the Carriage Shop sells various items, including a large range of books, to raise funds for carriage restoration.

Much of the carriage restoration done at Horsted Keynes is undertaken by volunteers. As the above lists show, there is a long line of carriages awaiting our attention. Why not come and join us; drop in for a look around the shed and see what we do! There is all sorts of work available, skilled and unskilled. Learn new skills, or brush up on those you’ve forgotten. There are people around every day. Join the Carriage Restorers and be part of an award winning department! 1309, Pullman ‘Bertha’ (no longer on the Bluebell) and the completed Metropolitan Set have been overall winners of the Heritage Railway Association (HRA) C&W competition, 3363, 32975 and 7598 have won HRA “Coach of the year” awards, and 387, 114, 661, 7598 and 1520 have received other prestigious prizes and awards.

Carriages and Vans which are no longer at the Bluebell Railway:

Southern Railway “Matchboard” Brake No.3554 was loaned to the Bluebell by the Vintage Carriages Trust, 1991-93. Photo

A rake of carriages was hired in 1963 to cover for the Chesham Set being sent to Neasden for the centenary of the Metropolitan Railway. These were Bulleid Brake Composite S6714S, Mk.1 TSO S4381, Bulleid Open Third S1495S, Bulleid Open Third S1473S, Mk.1 TSO S4014 and Mk.1 48-seat Open Second (later reclassified as Open First) S3504. None of these vehicles entered preservation. S3504 was used to supplement the Sheffield Park Buffet seating prior to the arrival of Maunsell 1365.

Maunsell low-window corridor 3rd No. S2354S was borrowed from BR for a Civil Defence exercise on 8 April 1962, as seen the previous week in Ian Nolan’s photo.