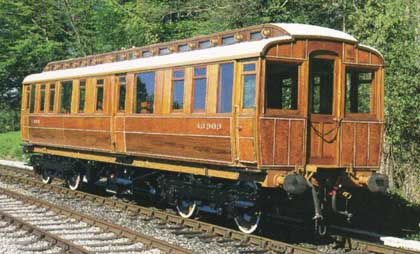 This magnificent clerestory saloon was constructed in 1897, and remained in the use of the GNR/LNER directors, then British Railways Eastern Region General Manager until 1969, when it was sold complete from Hornsey Carriage Sheds for the princely sum of £500.

To enquire about hiring the saloon for a day, please contact the Bluebell Railway via the “functions@” email address as listed for Charters.

The Saloon’s page on Facebook carries news of the Saloon’s activities, and the dates of public running for the saloon on the Bluebell Railway.

The saloon is owned and operated on the Bluebell Railway by the E.F. Howlden Charitable Trust, and all money raised by the Trust from its operation goes towards the maintenance and upkeep of the vehicle. 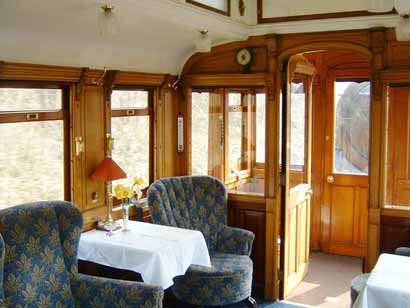 You can learn more about the saloon on its web page here.

In 2000 it became famous around the world as the “Old Gentleman’s Coach” in the TV film of “The Railway Children”.

The Saloon accommodates about 20 passengers in its two luxurious saloons, one of which is laid out in lounge style, the other in a boardroom style which can be easily adapted for a buffet luncheon. Due to its great age, and to conserve it for future generations, the saloon is only occassional for private hire, but also operates in public service (usually requiring a supplement or a first-class ticket) on selected weekends and special events.