The Bluebell Railway presently operates along an eleven-mile stretch of the old Lewes and East Grinstead Railway, opened in 1882, that at one time boasted seven signal boxes. Of the original seven, however, only that at Horsted Keynes has survived, and has attracted Grade 2 listed status, and is one of three operational boxes now in use on the Railway. 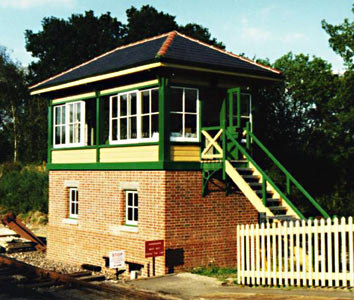 At the north end of the loop platform is the Kingscote signalbox (right). The cabin was rescued from Brighton Upper Goods Yard, and sat for some years in the top yard at Sheffield Park with the thought that it might one day replace the existing platform box there.

However it’s a good match, but slightly larger, for the original box at Kingscote, and a suitable brick base was built there, and the cabin erected on 30th August 1996. It is in a very similar position to the original Kingscote Box. It has graced the station with its authentic aura for nearly 20 years, but now, following the completion of the northward extension to East Grinstead, we have been able to fit it out to take over the signalling at the station from the temporary box (see below). Its first use in a signalling context was to host a token machine for the single line to the north of Kingscote. This machine, interlocked with one in the South Box, enabled a token to be issued from either box as was convenient, during the period while the signalling on the extension was controlled from the South Box.

The project to install a historically important Southern Railway/Region Westinghouse ‘L’ frame to take over all the signalling at Kingscote was completed in January 2016, and came into use on 5 February 2016. It will also eventually take over control of the East Grinstead layout and the interface with Network Rail, which is currently handled by a pair of ground frames interlocked through the use of the Annett’s Key on the token.

The ‘L’ frame has a mixed pedigree of parts obtained from a number of sources. The main frame of levers 1 to 12 was donated to us having been previously used on the Dartmouth Steam Railway where it controlled Churston station from 1979 to 1991. This section is of historic interest in being from the very first ‘L’ Frame to be commissioned, on the Southern Railway at North Kent East Junction (near New Cross) on 1st December 1929. Other parts were supplied from two private collections, some originating from Crewe South Junction. The largest contributor was the National Railway Museum who kindly provided a quantity of parts from Clapham Junction “B” signal box. 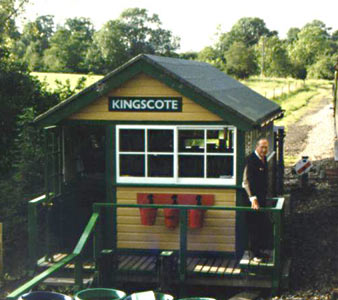 For twenty years Kingscote was controlled from a temporary signal box alongside the points to the south of the station. This box (left) was built around a ground frame, entering service on 27th April 1996, and was passed for two-train operation on 15th May 1996. The re-opened line to East Grinstead was initially controlled from this box, which was de-commissioned on 5 February 2016 once the new box north of Kingscote had been completed.

There is a signal box diagram for the new box, with an explanation of its working available. 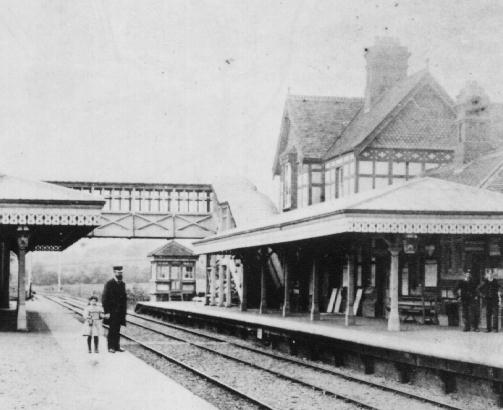 Sheffield Park station, as built, with the now demolished North Box visible under
the original footbridge, which is also no more. (Photo: Bluebell Archives)

With traffic levels dropping between the wars, rationalisation came to the Railway and both the North and South boxes at Sheffield Park were closed and replaced by a ground frame on the down platform. This remained the situation throughout BR days and only changed when, faced with ever larger crowds on the platform, the Bluebell, after its first year of operation, constructed the present signal box around the ground frame. Built in the manner of the LBSCR, it blends in well with the rest of the station buildings and looks as if it has been there for many a decade! The Signal Box Diagram, including a description of the signalling at Sheffield Park, is available. 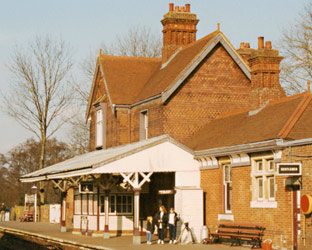 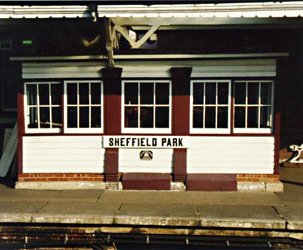 The current Sheffield Park Signal Box, under the canopy on Platform 1. 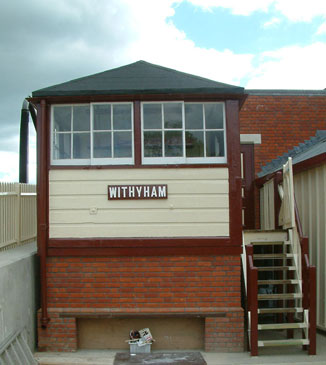 The second signal box now at Sheffield Park is part of the Museum display. It is Withyham Gate Box, from the line between East Grinstead and Tunbridge Wells, initially preserved privately by a Bluebell member, and now re-erected at the north end of Sheffield Park and refurbished to LBSCR colours, as seen in David Chappell’s May 2011 photo. More information about Withyham Signal Box is available here.

In the longer term, the cramped and poorly sited platform frame will be replaced with a reconstructed “North” box, as part of the long-term plan to re-signal the station, with extended platforms at the northern end, and an improved track layout at the south. This is also a pre-requisite, due to the location of the current box, for the long-term aim of recreating the original footbridge as seen in the above photograph. 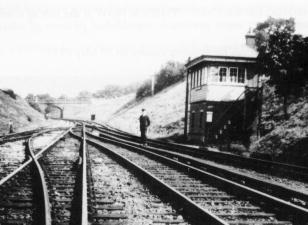 Horsted Keynes, being a junction, did not suffer such drastic pruning of its signalling arrangements as happened at Sheffield Park.

In 1914 the site of the junction of the Lewes and the Haywards Heath lines was moved from the north of the station to the south and the North Box was removed from the block system. The box continued in use, indeed it still had almost all of its original functions, but now as just a shunting frame. Seven levers were added to the north end of the South Box’s original 33 lever frame to operate the additional functions required to interface with the Shunting Frame. At the same time both lever frames were adapted to incorporate a revised mechanical interlocking arrangement; the old “rocker” locking was removed, and replaced with the then modern tappet locking, originally patented by Stevens, and used on the LSWR. This was part of an ongoing programme by the LBSCR at that time, taking advantage (it is thought) of the expiry of Stevens’ patent whenever an alteration, such as this was required. Evidence of this conversion in the South Box, is clearly visible today.

Then with electrification in 1934/35 there was a further small signalling change. Prior to this date Ardingly trains could enter the station on two lines, one to what is now Number 3 Road (then “Up”) and one to what is now Number 2 Road (then “Passenger Loop”). To return, we believe they had to shunt across to what is now Number 4 Road (then “Down” Line). For the electrification the layout was modified so that all Ardingly trains entered the station on what is now Number 2 Road (“Up Main” from 1935) and also left from this Road, using a crossover to gain the Down Ardingly Line. At this point in the history of Horsted Keynes the North Box was demolished following the earlier relaxation of the Board of Trade requirement for the maximum distance of mechanically worked points from 180 yards to 350 yards. (When the Bluebell took over the station, the distance to what was then the North Crossover points was 330 yards). 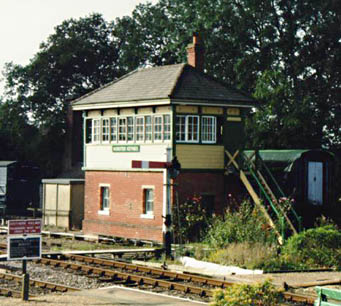 The South Box is unique amongst surviving LBSCR boxes, being designed by the railway along with the stations on the line, rather than by Saxby & Farmer, who supplied the signalling equipment, and usually the boxes as well.

From 1935 until closure in 1963 the double track line from Haywards Heath was electrified and a service operated from Horsted Keynes via Haywards Heath and Lewes to Seaford. Horsted Keynes must have been just about the most remote terminal of an electric service anywhere! Many people think that the line was electrified this far as the first part of electrifying the whole route from Haywards Heath via East Grinstead to South Croydon but, although this was the Southern Railway’s eventual aim, the reason for the juice going through to Horsted Keynes in the first place was to avoid congestion at Haywards Heath. Instead of terminating the Seaford service there, and having to shunt trains across the tracks for their return, they simply ran them through to Horsted Keynes where they used what is now Platform 2, which was, in effect, a single line terminus for a double track route.

So, the South box has survived. In order that the box could fulfil its new duties the frame was extended in 1914 from 33 (with just 27 used) to 40 levers, all used. One interesting aspect of this change was that the new levers were added to the left side of the frame so that when you look at the quadrant for lever number 8 it has engraved on it the number “1”. Similar numbers progress across the frame to the right-hand side where the quadrant for lever number 40 claims to be number “33”! To assist general safety, after the closure of the North Box the LBSCR also removed the canopy from platform 1/2 in order to give the occupant of the sole remaining signalbox a clear view of the whole station layout. Not much else changed, as far as the box itself is concerned, for the remainder of its LBSCR/Southern/BR life. 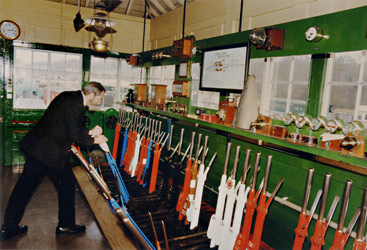 When the line finally closed the whole of the interior of the box was ripped out leaving the Bluebell with just the basic superstructure and the frame. It is a great credit to Charles Hudson and his S&T team that when visitors enter the box they think the array of ancient equipment before them is all part of the box’s history. In fact each instrument in use has been carefully sourced to fit in with the box and create the “authentic” feel that the box enjoys.

What about the future? The complete renewal of the track layout at Horsted Keynes some years ago had a major impact on the signal box, having been designed to cover not only the existing operation but also future operation towards Ardingly. The re-instatement of the canopy on Platform 1/2 was possible due to the adoption of track circuiting covering all the track layout. The re-signalling of necessity involved a mix of mechanical and electrical interlocking and signal/point working so as to remain within the capability of frame. Click here for the full story of the work to resignal Horsted Keynes.

So the future of the existing box, a real old lady and one of the brightest jewels in our crown, seems safe for years to come. None of this work is cheap although the cost has been assisted by the proceeds of the football based competitions we have run. A substantial amount of the box’s brickwork needed replacing and this has been paid for with the funds raised from the football competitions. The replacement timbers needed to support the frame were massive and expensive, and have also been paid for from the proceeds of these competitions which have raised about £3,500 from entries and donations – one of which was particularly generous.

The box here opened on 1 August 1882, and was closed on 17 March 1958, being demolished along with the station itself a few years later. There are some photos of the station and its signal box on the first two pages for West Hoathly on the “Disused Stations” website.