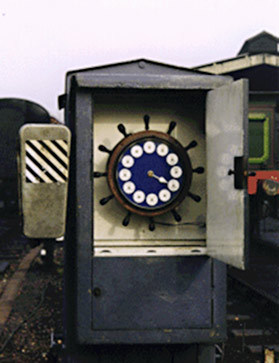 Left.The sending instrument in the loco yard. The box on the left contains a “speaking instrument” (telephone). Note the levers outside the dial of the instrument making it resemble a ship’s steering wheel!

Below right.The receiving instrument situated on the shelf in the Signalbox. The bell on the top strikes once for each position the pointer passes. 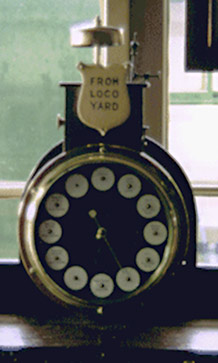 When the running foreman (or other authorised person) needs to send a request to the signalman for a particular move to be set up he has to carry out the following procedure:-
First he will need to pull towards himself the lever adjacent to the appropriate tablet and then he has to push away from himself the lever by which the pointer is currently resting. The pointer will now run around the dial until it reaches the lever that was pulled and then remain in that position. The “Receiving” instrument in the Signalbox will step on in unison with the “Sending” instrument whilst a bell will sound one beat as it reaches each tablet. If the destination tablet occurs less than five points from where the pointer is resting then the mechanism and pointer must be allowed to travel a complete circuit of the dial to the “new” description. To do this the levers are worked in the opposite order so that the lever adjacent to the appropriate new description is pulled out after the pointer has passed that description.

As with all things mechanical, it does sometimes happen that the two instruments can become out of phase. In this situation the instrument should not be used until such time as an engineer from the S&T Department has corrected it.