The origins of the electric key token lie in the electric train tablet system that was originally developed in 1880 by Tyer & Co. in conjunction with the Caledonian Railway. The function was simple, by means of having an instrument at each end of a block section, electrically interlocked, just one tablet at a time could be withdrawn (from either end) and given to the driver as his authority, in conjunction with the correct signals being off, to go on the single line. Early tablets were in the main round (there were some square ones used for long section purposes) with a varied number and position of notches so that the tablet for one section could not be put in the instrument for the adjacent section. Later versions had a single notch in a standard location, but a varying shape was used.

This was followed by the electric train Staff of 1888 and then, in 1912, the Great Western Railway developed the electric key token, licensed to Tyer & Co., which used a smaller token, operated in the instrument in the same manner as a key in a lock. Once again, provision was made to prevent the possibility of a token being put in the wrong instrument, this time by means of a slot in the key quadrant although some special purpose tokens had two slots. To assist with visual identification, the handles are made in four different shape/colour combinations with no two adjoining sections having the same shape/colour. 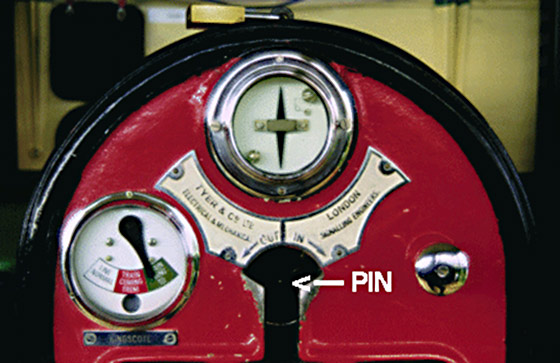 Left: The Token Instrument in Horsted Keynes Signalbox controlling the single line from there to Kingscote.
Right: Close up of the top of the instrument showing that a token is out and indicating “Train Going To”. The chrome knob on the right is the plunger.

The method of use as practised on the Bluebell is as follows:-
“A” and “B” represent the Signalboxes at either end of a block section. Prior to the despatch of a train from “A” the signalman there, provided all other criteria have been met to send a train, must send the appropriate “Is Line Clear” signal to the signalman at “B”. Assuming the signalman at “B” is able to accept the train, having replied to “A’s” bell signal “B” will hold in his plunger until the galvanometer needle, which will be deflected, momentarily returns twice to the upright position, indicating that a token has been withdrawn at “A”. “B” must then immediately release his plunger. When the signalman at “A” sees the galvanometer needle deflect he must place a key-token on the pin and give it two half turns to the left which set his indicator to the “Train Going To” position. The key-token can then be withdrawn from the instrument. When the galvanometer needle has again returned to the upright position after “B” has released his plunger, “A” must plunge to “B”which will change “B’s” indicator to the “Train Coming From” position. The signalman at “A” will then lower his signals for the train to leave, place the key-token in a leather pouch and hand it to the driver. Once he has lowered his advanced starting signal he cannot replace it and lower it again without replacing the key-token in his instrument and obtaining another release from “B”.

On arrival of the train at “B” the signalman there must obtain the key-token from the driver and, after replacing his signals and checking that the train is complete, deposit it in his instrument by placing it on the pin and giving it two half turns to the right. He must then plunge to “A” which will change “A’s” indicator to the “Line Normal” position and give “A” the “Train Out of Section” signal which must be acknowledged by “A” who must then plunge to “B” to re-set “B’s” indicator to “Line Normal”. Should it be necessary to replace a key-token in the instrument from which it was withdrawn, then the “Cancelling” signal must be sent to the signalman at the other end of the section, and acknowledged.

It is frequently the case on other railways that the Release Plunger is also used for belling, but in the case of the Bluebell a seperate bell plunger is used.