Following on from the invention of the electric train tablet in 1880, the electric train staff was developed in 1888 by the L&NWR and licensed to the Railway Signal Co. This company had been formed by an ex-employee of the L&NWR, one George Edwards, who had started his work on signalling with Saxby & Farmer, had left them in 1873 to become the signalling superintendent of the L&NWR, left them in 1876 to join the Gloucester Wagon Co. when they decided to diversify into signalling and who finally set up his own company, the Railway Signal Co., in 1881. Not surprisingly, he obtained a large number of contracts from the L&NWR which led to the Railway Signal Co. becoming probably the most successful signalling contractor in the 1890s. 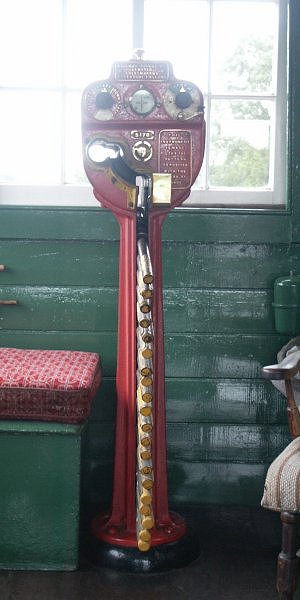 The function of the electric train staff is simple, by means of having an instrument at each end of a block section, electrically interlocked, just one staff at a time can be withdrawn (from either end) and given to the driver as his authority, in conjunction with the correct signals being off, to go on the single line. The staffs are made with five rings which coincide with slots in the instrument, four of them at a set spacing whilst the fifth is set at a different spacing from the instruments for the sections on either side, thus preventing the staff for one section being put in the instrument for another section. They all carry the names of the block posts at either end of the section, and are painted in different colours and distributed so that no one colour can ever apply to the staffs of adjacent sections.

Below right: Close-up of the head of the Instrument. The staffs are kept in the slot in the lower part of the Instrument and when one is required, it is lifted to the top and, provided a release is being given by the signalman at the other end, the relay will allow the cam inside to rotate thereby permitting the staff to be withdrawn. 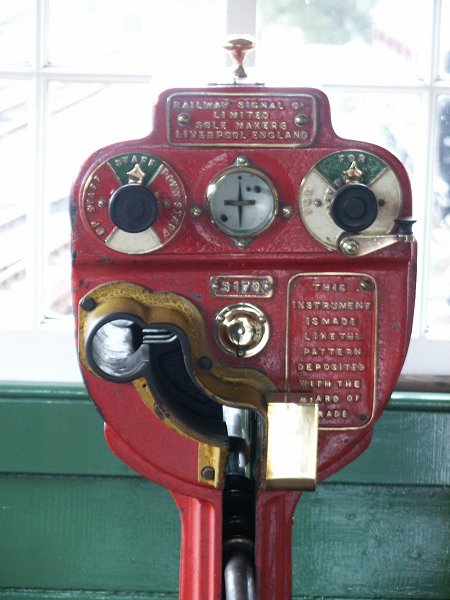 These Instruments gave long and faithfull service on the Bluebell, in use between Sheffield Park and Horsted Keynes, until being replaced by Key Token Instruments at the end of 2004. They are being kept, however, with the eventual aim of being used on a future Horsted Keynes to Ardingly section.

The method of use as practised on the Bluebell is as follows:-
“A” and “B” represent the Signalboxes at either end of a block section. Prior to the despatch of a train from “A” the signalman there, provided all other criteria have been met to send a train, must send the appropriate “Is Line Clear” signal to the signalman at “B”. Assuming the signalman at “B” is able to accept the train, having replied to “A’s” bell signal “B” will hold down his release key until the galvanometer needle, which will be deflected, returns to the upright position, indicating that a staff has been withdrawn at “A”. When the signalman at “A” sees his galvanometer needle deflect he must point his right-hand indicator to “For Staff” and take out a staff which will mechanically repoint his right-hand indicator to “For Bell”. As soon as “A” has taken out a staff he must turn the pointer on his left-hand indicator to “Down Staff Out” if it is a down train, or “Up Staff Out” if it is an up train. “B” must also turn his left-hand indicator to “Up Staff Out” or “Down Staff Out” as the case may be.

The signalman at “A” will then lower his signals for the train to leave and hand the staff to the driver. Once he has lowered his advanced starting signal he cannot replace it and lower it again without replacing the staff in his instrument and obtaining another release from “B”.

On arrival of the train at “B” the signalman there must obtain the staff from the driver and, after replacing his signals and checking that the train is complete, insert it in his instrument and give “A” the “Train Out of Section” signal which must be acknowledged. Both “A” and “B” must now repoint their left-hand indicators to “Staff In”. Should it be necessary to replace a staff in the instrument from which it was withdrawn, then the “Cancelling” signal must be sent to the signalman at the other end of the section, and acknowledged.

It is frequently the case on other railways that the Release Key is also used for belling (hence the “For Bell” position), but in the case of the Bluebell a seperate bell plunger is used.

Text and photos Copyright © Peter Richards,
with thanks to Andrew Marshall for his assistance.
Last updated 19 July 2005 by Peter Richards
and 27 May 2020 by Richard Salmon.