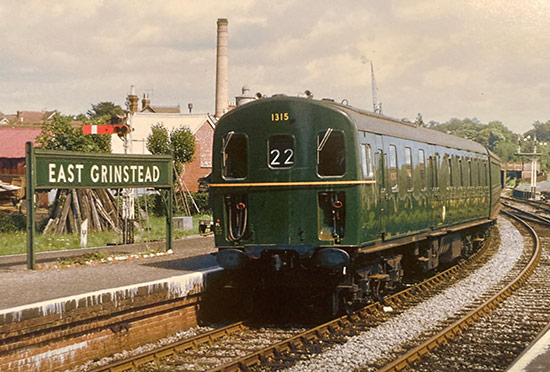 Photo shows another Oxted unit, 1315, at East Grinstead when new.


“Oxted units or “3D” DEMUs were built for the Southern Region, specifically for use along the Oxted Line to East Grinstead and Tunbridge Wells West and were introduced in 1962 after the success of the Hastings and Hampshire units. All these units were colloquially known as Thumpers due to the unique “thumping” noise their 4 cylinder diesel engines make.

In 1991 207005 was converted for conductor/guard operation and renumbered to 207102. This conversion involved removing the centre coach, converting the lighting to fluorescent tube, fitting a PA system and fitting corridor connections between the remaining two coaches.

The restoration will be carried out by the 1305 Oxted Thumper Gang, a group of volunteers separate from the Carriage & Wagon Department.

Once back in service it will be used for the first and last services of the day from and back to East Grinstead, allowing an earlier start for visitors travelling from the National network as well as saving the steam locomotive crews hours.
She is also a useful backup in case of a locomotive failure and if we suffer from high fire risk in hot weather like summer 2022, a service can still be run.

The work is expected to take 2 years with your help, be it joining the 1305 Oxted Thumper Gang and volunteering, donating to the restoration of her back to passenger service, or both!

To donate to the costs of getting this unit up and running on the Bluebell, please use the links here, and choose “Oxted DEMU 1305” from the drop-down menu. 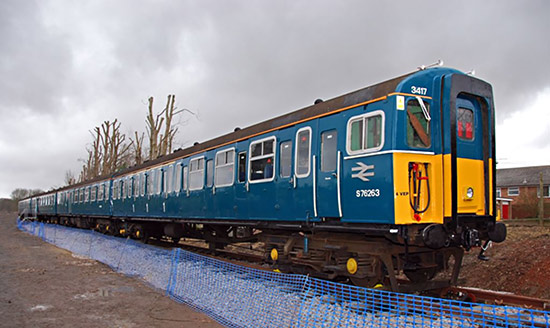 
3417 was formally handed over by South West Trains to the Bluebell Railway on Saturday 17 January 2009 at a ceremony at East Grinstead.

The unit remains in Bluebell Railway ownership, but since May 2012 has been in the care of The Southern Electric Traction Group. This was founded in 2009 by staff members of South West Trains based at Wimbledon Park depot. A long-term loan agreement exists with the Bluebell Railway for SETG to provide specialist operational and technical knowledge to ensure the long-term future of 4 Vep No. 3417, with the aim being to return the unit to mainline operation. The unit is currently based at Strawberry Hill Depot. The latest news on 3417 may be found on SETG’s news page, Facebook and Twitter.

Our four Metropolitan Railway carriages, which were at one time EMU vehicles.

Multiple Unit vehicles which are no longer at the Bluebell Railway: